Don’t drink diet sodas. Don’t eat swordfish. Don’t go jogging in LA. “A day doesn’t go by without some new report of dangers lurking around us in the environment. And so we’ve changed our diets. We’ve begun taking measures to reduce air pollution. We’re getting pretty serious about recycling. All of this in an effort to improve our environment and by extension, our own health,” says entrepreneur and mobile app developer Gil Friedlander.

One particular danger zone that Friedlander is interested in is the effect of mobile radiation. After looking at different hardware solutions to this problem, Friedlander discovered that our phones are already equipped with what we need to protect ourselves but we just don’t have access to that information… until now. In order to raise awareness and reduce the potentially hazardous risks of cell phone radiation, he launched tawkon, the only Android App that protects users from cellular radiation exposure.

The tawkon team launched its new Android app today at The Next Web Conference in Amsterdam. “Deep in the guts of a phone’s circuitry, we found that components actually gather radiation-related data. We learned how to gather this information and built tawkon,” says Friedlander. The resulting app provides alerts when radiation levels spike and simply suggests you make a quick change — as you begin a call or while you’re in the middle of one. Once you make that change, tawkon confirms that you are once again in low exposure and ready to ‘talk on’. 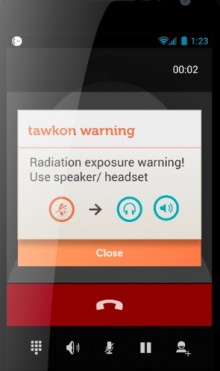 According to Friedlander, radiation can be affected by such variables as usage minutes, handset placement, distance to the cell phone towers, weather conditions, number of users in a specific cell area and intensity of the cellular signal. The two key and most straight forward suggestions tawkon provides are changing your location (just a few feet away and the phone radiation can drop) and distancing the phone from head/body — using a speaker phone headset or Bluetooth.

Friedlander says there are some low end copy cats on the Android Market but none of them have the sound Patent Pending Technology tawkon developed. The company was recently validated by a leading Radio Frequency Lab in the US that is FCC certified.

Why there’s no iPhone app: Tawkon was initially rejected from the Apple Store with a note saying the app would “create confusion with the users”. Following a meeting with Apple in Cupertino, the reason changed to an API compatibility issue and finally Steve Jobs wrote Takwon two curt words “No Interest”.

“The cellular phone is here to stay, and in the face of scientific uncertainty we want to give people the ability to make informed decisions about using preventative measures for a healthier lifestyle.” said Friedlander. “By using tawkon consistently, you can virtually eliminate exposure to unwanted radiation spikes.”

In addition to Friedlander, the Israeli based company was founded by Ori Goshen and Amit Lubovsky (pictured above). According to the Tawkon team, we know that cell phones emit radio frequency energy, which is non-ionizing electromagnetic radiation that can be absorbed by tissue close to where the cell phone is held. Some studies have demonstrated a slight increase in the risk of certain brain tumors, from aggressive brain cancers to benign non-cancerous brain tumors like meningioma or acoustic neuromas. Other studies, however, have not demonstrated any risk.

When asked what studies are underway to help further our understanding of the health effects of cell phone use, Friedlander points to a large prospective cohort study of cell phone use and its possible long-term health effects that was launched in Europe in March, 2010. This study, known as COSMOS, will enroll approximately 250,000 cell phone users ages 18 or older and follow them for 20 to 30 years. Participants in COSMOS will complete a questionnaire about their health, lifestyle, and current and past cell phone use. This information will be supplemented with information from health and cell phone records.

Worried about the risks associated with frequent cell phone use now? Tawkon is immediately available for free in the Google Play store.

Watch this video to learn more about tawkon:

Follow all our coverage of The Next Web Conference 2012 here.