The combination of a solid email client and a lightweight to-do list app are vital to keeping my sanity during the workday, but I’ve always just used two separate applications. I’ve been testing an upcoming version of Taskbox, an email client that also doubles as a task list, and it has the potential to consolidate both functions into a single service.

An early release of the Taskbox iPhone app is already on the App Store for $6.99, though it does have some bugs, so I’d recommend waiting for a more complete version that has been promised later this month. Android and HTML5 versions are in the works for release next year. The company is currently running a Kickstarter project in hopes of raising $30,000 to go toward adding more features, support for more email services and building a Web app.

The app currently only supports Gmail and Google Apps email addresses, but the Taskbox team plans to add on more providers soon.

Once you’ve signed in, you can scroll along your inbox and either swipe right to act on an email or left to dismiss it. When you swipe right, you’ll have the option of sending it to your “taskbox”, delegate it, or marking it as complete. The app makes a folder for each action and uses it to manage your tasks. You can also reply, set a due date and mark priority. 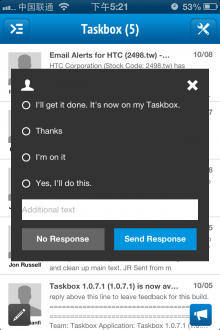 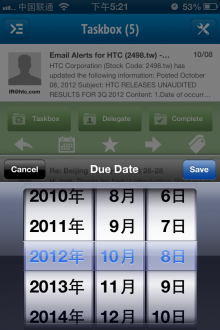 When you send an email along to your taskbox, delegate or complete folders, you’ll be given the chance to send a quick response to the sender. Responses are customizable, but the default ones are contextualized based on which action you’re performing.

If you’re interested in trying Taskbox out, there are still a handful for $5 pledges available that include a free copy of the app. The Kickstarter project runs through October 28 and it’s currently less than 10 percent backed.

Long term, Taskbox has an ambitious goal to build out its taskbox to also include voicemail, note taking apps, social networks, business automation applications and more.

“Our vision is a single unified taskbox  that helps you stay organized in your personal and professional life across all your sources of tasks,” Taskbox CEO Andrew Eye said in the company’s Kickstarter video.

It’s a lofty goal indeed, but best of luck to them. I’m guessing most of us would benefit greatly from a cross-service task sorter.