From Boris Johnson to Joanna Sheids, there’s no shortage of support for Londons’s Tech City. With employment in East London projected to grow 31 percent by 2031 compared with nine percent for inner West London, the incubator area near Old Street-better known as London’s “Silicon Roundabout” is regularly cited as a global startup player, hosting 3,000 firms including Hailo and Mixcloud.

With no shortage of backing for the Roundabout, I attended a demo presentation hosted by Cisco’s RAPTOR Small Grants Program this past January-and even more surprised to see that the Program’s part of a more extensive niche community within Tech City that I had never heard of.

Founded in February 2011, the Digital Enterprise Greenwich (DEG)-backed Digital Peninsula seeks a holistic approach to small business incubation that partners local startups with global corporates to create a community that spans academia, government and business. It’s a founding piece of the Cisco Systems National Virtual Incubator (NVI) Network, which opened at DEG in December ’11 and aims to span all of the UK, connecting small businesses with research clusters, higher education, and other startups to help each area innovate and grow-including the borough that hosts it.

Any business in the broad “digital space” can set up shop at DEG, but Communications Consultant Hayley Crompton cites clusters centered around “smart city” applications – including robotics, design media and content/design-led innovation – as areas that allow the space to help grow the Royal Borough of Greenwich at large, beyond individual businesses.

And with TSB and ERDF-funded programmes located in the DEG “smart city” space, there is strong emphasis on using the space to not only assist London’s reputation as an innovation hub, but also to make Greenwich a community model and contribute to its redesign and expansion.

“[Smart city emphasis] reflects our assets – including the importance of [design and communication college] Ravensbourne in digital design and media,” Crompton says. “The focus on the Royal Borough of Greenwich and the development partners has [made] the peninsula an example for smart cities. This has been spread wider across the borough and into all aspects of the Council’s work, including the opportunities that exist across London’s Growth Boroughs.”

A former digital advertising strategist with clients including CBeebies and BBC Switch,  Julian McCrea has also been recognized by the BAFTA Awards and Sir Ridley Scott for his short horror film, “The Craftsman.” He founded Portal Entertainment to lead the forefront of “immersive entertainment,” offering personalized entertainment experiences based on how engaged each viewer is. The transport, infrastructure, investor-friendly aesthetics and space for price all made setup at Digi Greenwich a given.

“[DEG] is strongly linked to two things – Ravensbourne and Cisco,” McCrea explains. “Ravensbourne are on hand if we need production, or post-production facilities. We have run a writers festival in the Peninsula for the last two years called the Immersive Writing Lab and were able to scale it well, due to the underlying digital infrastructure. Cisco have [also] made Digi Greenwich one of their National Virtual Incubators, which means it has a telepresence unit in the building.” 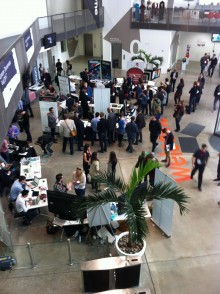 Joe Berg, founder of design consultancy PROD Designs, agrees the Cisco connection is vital. “For some of our clients, especially Oprillo (which received some funding from Cisco), their target markets are large muti-nationals, and the professional office facilities and links to other important companies and organisations gives our work more credibility and a better space to meet and entertain them in,” Berg explains. “The use of state of the art technology, especially Cisco’s Telepresence equipment allows working across various cities and countries easily, making global business a very viable solution from Greenwich.”

MIT graduate Lee Morgenroth has successfully expanded his startup, Leemail.me, at Ravensbourne, as well as his working space.  Leemail has hired new staff with the incubator’s help, and used several incubator teams to not only generate users for its consumer-controlled email service, but also for hands-on market research. He says proximity to Ravensbourne and the business innovation cluster, alongside the waterfront location, differentiates this space from Silicon Roundabout.

“With big interior open spaces and views of the river, [the Peninsula] is unique to London,” Morgenroth says. “We also like the energy of being inside an actual campus buzzing with students. For businesses that are producing media or industrial designs, all the tools you need for prototyping and production are here.”

So how is DEG different from the rest of Tech City? Similarities abound; Cisco has a strong presence throughout the Silicon Roundabout area, and Tech City also has substantial support from unis, including UCL and Imperial Innovations, the tech-transfer arm of Imperial College London.

That said, “[Digi Greenwich has] a rep for having a slightly more creative than technical skew, which suits us just fine,” Alexis Kennedy, Chief Narrative Officer at Failbetter Games, explains. “It’s also a little more serene than the bustle of Old Street.”

But the primary difference is its “bottoms up” approach to expansion. DEG isn’t financially supported by the UK’s Start Up Britain Initiative, and has grown thus far by responding to direct business needs, as well as its startup/corporate partnerships. Crompton says her role will soon include the EDRF-funded “Digital Accelerator” Programme to help SMEs identify new smart city markets. This will occur alongside her promotion of the Ravensbourne Digital Media Innovation Consultancy (DMIC) project through 31 March, 2014, as well as DEG at large.

So as the Roundabout leads the headlines, the use of of global partnerships to foster local growth makes DEG a smart city space to watch within the London roundabout.