You and I might pass by a black glass table with a chrome edge on a daily basis. It might be the office conference room table. Or perhaps that leftover-from-the-80’s hallway table that grandma is still hanging onto. But when Austrian filmmaker Nino Leitner walked into designer Lucas Triebl’s office, his first thought was, “This looks like a giant iPhone.” And thus, the idea for one of the coolest gadgets you never saw was born.

In one of the best “Gotcha”s I’ve seen in quite a while; the Table Connect team, consisting of Stefan Fleig, Lucas Triebl, and Nino Leitner, finally let the cat out of the bag recently at TEDxVienna, revealing that their highly sought after gigantic iPhone was nothing more than a series of smoke and mirrors, and an elaborate staging of visual effects and careful media seeding, resulting in over 3 million YouTube views and thousands of comments.

When the TEDxVienna confirmed speakers list was posted, my eye instantly fell on the Table Connect team’s live presentation. After doing a bit of digging around, it became blatantly clear that the team with a viral hit on their hands had never made a public appearance, and outside of YouTube, the table itself had never been seen. “What can they have in store for us?” I thought. Perhaps a new version of the table? A developed, ready for the masses, affordable version for all? Either way, an idea worth spreading, and something I’d definitely want to talk to them about. After building anticipation throughout the day (the team didn’t appear until approximately 4:30 PM), they enthusiastically took the stage and opened their talk with the video below.

The stage was now set to show us something amazing. Post opening comments, a video, and some stats, it was finally time to see this ~ 150cm tech wonder in action. After a false start and having some trouble “getting the app to load,” jovial audience members watched in horror as the Table Connect literally went up in flames; or at least a decent display of pyrotechnics. And thus came to an end an incredible fake that gathered attention the world over, including a few journalists here and here and here and there, a number of notable Fortune 500 companies, and hundreds of requests to purchase. 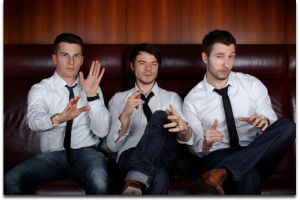 After realizing that this eBay purchased, black glass table did in fact largely resemble an over sized iPhone, the LOA Design Studio team members realized that the opportunity was just too good to pass by. Post production specialist Stefan Fleig took a comprehensive look at the design of the table, noting locations where tracking points could be placed, and doing the math on just how the team could optically convert this plain black glass surface into the world’s largest iPhone.

“I took a number of iPhone screenshots, and separated all the elements. I then took advantage of some packages readily found on the Internet for buttons and other items, but I had to rebuild the iOS interface, animate every icon, and even animate the time changes to accurately reflect how the actual iPhone functions,” says Stefan.

And if rebuilding Cupertino’s interface from scratch (mostly) wasn’t enough, of the three team members involved in the fake, only Nino is an iPhone owner; Stefan sports an Android powered HTC Desire, Lucas, a Windows Phone 7.

“There were many occasions when I’d need to call up Nino and say, ‘Hey, can you send over some video of swiping through the gallery?’ I then took this video as a basis for how many milliseconds a particular transition takes.”

Stefan estimates that the total time involved to animate the 71 second video was around 40 to 50 hours.

“Every day I watched it, I found a small detail that could give [the fake] away, and even though I put so much work into it, I have to admit that there’s one mistake in the animation that hardcore iPhone fans noticed; that there’s no gap between the gallery images.”

While Stefan was sequestered to the animation studio, Lucas and Nino were forming plans on how to get their device noticed. And what better way than to draw the attention of an always-hungry-for-a-story tech media industry?

The team admits that they didn’t exactly agree on how to release their video and gain maximum exposure. Nino wanted to hit the market with the finished video as soon as possible, while Lucas insisted that they needed time to get the multiplicators lined up. During the debate, it was Stefan who included the idea of actively tipping the media to pick up on the story, and a plan was hatched.

On October 29th, 2010, Engadget author Darren Murph took LOA Studio’s bait, and published a short article about the Table Connect device, a full 5 days before the video was uploaded to YouTube. The team had the idea to tip the media before the actual arrival of the video, initially setting up a blogspot blog (that now redirects to their studio site), and alerting Engadget to their story approximately a week before the video was ready for viewing.

“I though there was no option that they’d pick up this story without the video … we even had these really bad mockup images, intentionally bad so that everyone would see that they’re mockups,” says Nino. “And then Engadget ran the story, without the video. At that point, we knew that this was going to be huge the week that the video went live.”

One of the very first comments on the video by YouTube user Scorpiix reads, “Fake. You press the Sleep/Wake button when you launch the app.” Likewise, the team tells me that the first comment on the blog was in a similar vein. “My initial reaction was to delete it,” says Nino. “But then Lucas and Stefan rightfully said that if we do this, we’ll only give credence to his assumption, most probably resulting in a flood of similar comments.”

“It was quite a shock to me, as I worked my butt off to make this look as real as possible, and then the first second it’s online, there’s someone out there spotting that something is wrong,” comments Stefan.

Given this situation, I asked the LOA Studio’s team what the plan was moving forward. They all admitted that it was quite difficult to remain calm after being called out, but in the end, they stuck to their guns, and attracted evangelists along the way. “Anytime something happens that doesn’t fit to your plan, you absolutely must keep your personal emotions in check,” adds Lucas.

When asked if the team would do anything differently, either technical or promotion wise, filmmaker Nino comments, “Even the small mistakes we made like the little pinky finger thing, in the end, just helped it to make the project as big as it was. For as many people that called out the table as fake, we had just as many people saying that it was real, actively defending us. If it was too perfect, the discussion would have ended much earlier.”

As the team closed their TEDxVienna presentation they mentioned accomplishing something that most marketers dream of and work their whole lives towards. I asked them about this comment, and what advice they could give to would-be viral hit producers.

“You have to be able to give up control as a company when you’re planning to do a viral. You can plan it only so far, but you simply have no idea where it’s going to go from there,” says Nino. “There are a lot of examples of intended viral hits not succeeding in one way or another, or being taken in the completely wrong way. Companies also have to be aware that they can’t expect any guarantees when they decide to go for a viral success.”

“There are always things where you have to make decisions, for example, we could have started thinking about how to deal with comments that point out the video’s flaws much earlier and included them in our planning. We were quite stressed, but had to react fast. We should have also considered all the negatives and been prepared for them,” adds Stefan. “Have a backup plan, and try to imagine what could happen.”

“Thinking about shared responsibility within the team, we were democratic about the decision making process which, quite honestly, slowed us down and made us hesitate. If one person was responsible for one thing, and another for something else, at least one person could take the blame if something went wrong; but would also be responsible if something went right. We could have benefited from having team roles and leadership on something like this,” comments Nino.

While the Table Connect may have been the greatest gadget you never saw, that’s not to say that attempts weren’t made to take the project from fake to for real. “I really wanted to make this a possibility. The fact that something like this could actually come to fruition based on our staged viral video just makes the story even better,” says Stefan. The LOA Studio team spoke to a number of software companies and tech persona, specifically one in Vienna, where serious discussions eventually broke down, as no common agreement could be settled upon. “There were three companies where we were close to signing a deal with us in some way, or collaborating on this project, but in the end it came down to a matter of resources.”

If the team had actually managed to pull off a 58 inch touchscreen display desk, “I would have loved to have seen the reaction from Apple. In fact, we did have a two initial @apple.com email address sign up for our newsletter,” says Stefan.

“At the very least, we hope we’ve inspired one or two companies to build something like the Table Connect,” says Stefan. “The one that we’ve found has named their product Padzilla, but the lag is certainly noticeable between the touch events and the reaction on the screen.” The Padzilla from Crunchy Logistics features a 70” screen, and has been covered by TechCrunch.

While it might have been the object of desire that sadly will never be (or will it?), the Table Connect certainly inspired a number of us to think even bigger when it comes to the potential of large touch display interfaces, particularly those that we could easily attach our portable devices to. However, I find the better story here in the outstanding animation and film making skills of the LOA Studio team, their careful planning of, and seeding to just the right media outlets, and being able to weather the storm of “FAKE!”s while picking up strong brand advocates of a product that never existed along the way. The lesson for marketers here is to pick up on a Zeitgeist, find the perfect vessel for delivery, and be able to successfully create anticipation through selected media placements to maximize your launch.

What’s your take? One of the greatest fakes to hit the Internet this past year or something that was blown way out of proportion?