The Tesco supermarket’s online store now carries stock from other suppliers including Maplin and Crocus. The move sees the company go head-to-head with outlets like Amazon, providing  more product choices for shoppers. 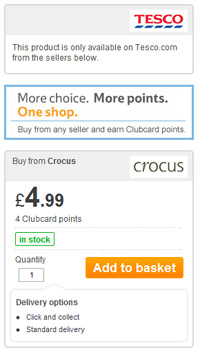 As Tamebay also notes, the addition of these suppliers has also changed the product notes on site. The sellers are clearly marked, as are Tesco’s own products and when something is not in stock, the ‘No seller’ caption is added to items.

A larger range of products available online will no doubt please campagners who have been fighting the spread of Tesco Metro shops (the smaller local version of the supermarket), branding it a ‘Tescopoly’.

The supermarket chain has scaled back plans for future superstores in an effort to boost figures and take on rising competition from Sainsbury’s.

The Privacy and Cookies Policy page on the Tesco Direct site has been updated too. The addition of new sellers means that customer details will be shared with those suppliers so that orders can be efficiently processed.

Customers can still claim Tesco loyalty points when buying these products through the online store.

Tesco has a long way to go if it wants to truly take on a giant like Amazon. The beauty and success of Amazon’s online retail service not only encompasses the enormous range of suppliers but also reflects the ease of use and prominent brand position for Web shoppers.

Though Amazon also sells some grocery products alongside it’s known domestic and electronic items, it is not so well known for this service and Tesco would do well to lean on its advantage as a UK brand name for food and home shopping.

Tesco is undergoing a general shake up to branding and services at the moment. The company’s full year results are expected to arrive soon and pre-tax profits are expected to be around £3.64bn. This is reported to be the lowest rate of profit growth for seven years.

Rebranding also seems to be a part of a wider plan for Tesco as the well-known Value range with it’s blue and white striped livery is due to be replaced with ‘Everyday Value’. The bargain products are not just getting  a facelift but also will see a change in quality and ingredients.

As the predicted profits are not looking so hot and other supermarkets are snapping at the heels of the retail giant, it remains to be seen if this addition to online offerings will help. As the addition was not exactly announced with whistles and bells, it could be that other suppliers may yet join the company retail site to help Tesco regain its competitive edge.