650 people have just returned home from Summit Basecamp, a 3 day event in the snowy mountains of Lake Tahoe. Each person carries home a unique experience, soaked in new inspiration, and each has passed on their own knowledge in subtle ways. For many, the experience changed their lives and for most, it provided fresh outlooks on life.

This was the third major event produced by Summit Series, an experimental events company that serves a collection of artists, entrepreneurs, activists, philanthropists and musicians in an effort to make our world a better place. The idea for Summit Series began on a 19-person ski trip at Utah’s Alta resort in April 2008. Since then, founder Elliot Bisnow and his 15-person full time team (along with dozens of part-time staff) have put together events like DC10 and last year’s Summit at Sea, which gathered over 1,000 attendees including Sir Richard Branson, Peter Thiel, Russell Simmons, Blake Mycoskie, Gary V and Peter Tunney. 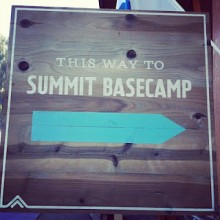 As a first time Summiter, it’s easy to say that Basecamp was the best Summit Series event yet. But, in truth, there’s no easy way to report on a conference of this magnitude. Let’s get this out of the way: Yes, the event is exclusive, expensive and gives off odors of elitism. Forbes has called it “The Hipper Davos.” But Summit Series has also been called “the greatest accelerator and incubator of friendships in the world,” as described by Anneke Jong, an entrepreneur and TEDster.

Mornings at Summit Basecamp began at 7am with yoga, meditation and breathing workshops with revered teachers like visionary Rabia Hayek and yogis Briohny Smyth and Elena Brower. The days were jam packed with sessions featuring notables like motivational speaker Sean Stephenson, Twitter’s Evan Williams, WordPress’ Matt Mullenweg, neuroscientist Christoper deCharms and The Lean Startup author Eric Ries, as well as activities like polar plunging, ice skating, snowball fights and lucid dreaming workshops until the sun’s early light. There were 3 robots, 2 falcons and a 150-lb mountain lion; as well as 1 DJ Jazzy Jeff, 1 Questlove, 1 Jonny Moseley and 1 President of Georgia (the country). There was also a mountain to ski or snowboard and warm, sunny days to be enjoyed outdoors. In short, there was very little time for sleep.

I was running late the first night and for a moment, I was stressing. I caught the shuttle and wound up chatting with Adam Garone, the Founder of Movember, who told me how he’d raised $150 million dollars last year for prostate cancer. Then, after arriving late to dinner, I found an empty seat next to musician José González, whose songs have captivated my heart for years. After that, I decided not to stress about being on time to anything for the rest of the weekend.

The production value of this event is not to be understated. The Summit Series team, led by its “Swiss Army Knife” Adam Dexter transformed the Squaw Valley Resort into a “Narnia-meets-Walden-meets-1920s speakeasy”. The 25-foot geodesic dome with 360 degree projection and vibra-acoustic chairs was a favorite post-midnight nap spot where attendees tried lucid dreaming workshops and listened to Larry Harvey, the Founder of Burning Man as well as David McConville, the President of the Buckminster Fuller Institute.

Inside the resort, a 6,000 pound wooden stage welcomed artists such as The Glitch Mob, Castro & Guevara, Q-Tip and DJ Jazzy Jeff. And if you didn’t feel like dancing, there was a hidden speakeasy (through the janitor’s closet next to the musician’s room), which offered up cocktails and jazz music til late in the evening. In keeping with the natural, earthy feel of Summit Basecamp, the installations, handcrafted signs and badges were all made from western red cedar and 27 open flames burned around the resort property.

On Saturday night, after 3 bottles of sake at a delicious sushi dinner in the Village with the founders of Qwiki and Stylecaster, we boarded an illuminated gondola to the top of the mountain where the Summit Team had turned a lodge into a night club. As we we rode up to the top, lasers shot out across the valley and a projected Summit Series logo appeared on the face of the mountain. Once we arrived at the event, titled “Beats at 9,000 Feet” we danced to Questlove and swapped cards around an open bar.

The event’s alchemy gave birth to an intellectual playground of science, technology, music and the great outdoors. But enough with words for a moment…

Check out our favorite photos and videos from Summit Series Basecamp 2012:

The title for this post may well have been “embracing awesome-nimity” because if we’ve learned anything after 4 days in the snow in Squaw Valley, California, it’s that entrepreneurs inhale and exhale awesomeness.

This year, Summit Series made a particular effort to get more women involved (2 out of every 5 attendees was female). The W+ mixer celebrated the community of Summit Series women and a lineup of female trailblazers including Change the Ratio’s Rachel Sklar spoke on a panel titled “Is it Hot in Here? Or is it Just the Glorious Potential of Diversity, Progress & Gender Partnerships in the 21st Century“. I arrived at the tail end just in time to hear Baratunde Thurston, author of How To Be Black emphasize the need for all minority groups to stand up for one another, i.e. blacks for women, women for LGBT. “A vision for the future is that each group works for one group over,” he said.

One of the most exciting entrepreneur stories we heard this weekend was from Michael Uslan, who was once an 8-year old obsessed with Batman and grew up to be the award-winning executive producer of the Batman movies. He spoke at the Summit Basecamp closing plenary, following education entrepreneurs Marco Petruzzi and Doug Weston of Green Dot Public Schools, whose heartfelt presentation brought me to tears.

The official closer for the event was motivational poet and storyteller Sekou Andrews who crooned, “Are you businesses or bodies? You’re businesses in bodies!… As entrepreneurs, you’re making a living doing what you live for.” Amen.

Now that we’ve returned home, carrying new knowledge (Did you know a 6 second hug is enough to release oxytocin?), inspirations and human connections, it’s time to reflect, to digest, and then to act and create.