The story of Steve Jobs ouster and return to Apple has been told many times. He was forced out of the company by a board that had lost confidence in him, and CEO John Sculley, who he had actively recruited himself. When his company NeXT was purchased by Apple in 1997, he managed to maneuver himself in a position to be offered the CEO spot back, but, strangely enough, he didn’t immediately jump at the offer.

When Ed Woolard, Apple’s Chairman of the Board at that time, called Jobs and told him that CEO Gil Amelio was out and they wanted Jobs back in that position, Jobs had second thoughts. This was first revealed by ex-Apple-intern Jonathan Berger in late August in an account linked to on Daring Fireball.

According to Berger, there was an Apple town hall meeting shortly after Jobs returned as iCEO and Berger had the opportunity to ask him one question:

Steve, many years ago you left Apple to start Next. But recently you returned to Apple. Why did you come back to Apple?

To which Jobs replied with his characteristic candor:

When I was trying to decide whether to come back to Apple or not I struggled. I talked to a lot of people and got a lot of opinions. And then there I was, late one night, struggling with this and I called up a friend of mine at 2am. I said, ‘should I come back, should I not?’ and the friend replied, ‘Steve, look. I don’t give a f*ck about Apple. Just make up your mind’ and hung up. And it was in that moment that I realized I truly cared about Apple.

This led to a lot of speculation about who exactly originated this quote and many, including John Gruber and myself, assumed that it was Larry Ellison, who was a long-time confidant and friend of Jobs.

But in Walter Isaacson’s biography of Jobs, the recipient of Jobs call turns out to have been Andy Grove, one of the co-founders of Intel along with Robert Noyce and Gordon Moore. Grove is the center figure in the image to the right. 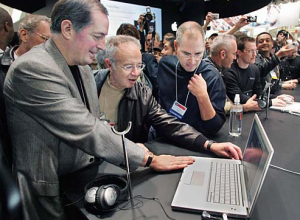 Then CEO of Intel, Grove had long been one of Jobs’ idols, in fact Jean-Louis Gassée remembers Jobs’ father being extremely proud of seeing his son onstage with Grove at the announcement of NeXTSTEP being ported to Intel.

According to the account that Jobs gave Isaacson, the call to Grove was 8am on a Saturday morning, but the content of the call was very much the same. Grove stopped Jobs’ long-winded list of pros and cons of returning to Apple and told him “Steve, I don’t give a sh*t about Apple.”

Jobs said he was studded and realized that he “did give a sh*t about Apple. I started it and it is a good thing to have in the world.”

And that is how Jobs finally made the decision in 1997 to come back as CEO on a ‘temporary’ basis that would last until a month before his death in October, 2011. In 2005, Apple made the transition to Intel processors, which it still uses today.