The first Monday of 2010 might be a good moment to look at the State of Technology: what has it brought us, what is it doing for us now and where is it all taking us in 2010?

In 2010 the World Wide Web will unofficially turn 21. Twenty-one is an important age. It is supposed to be the age of maturity. In a way you could say that the web is mature now. It is an individual object, system, movement or organism that has found its place in society. It is here, it is visible and unavoidable and not going away anytime soon. We all use it and most of the readers of this blog make their living off of the web.

But what is the meaning of maturity? When you turn 21 you might think that you know everything there is to know and you might even feel very mature. Once you turn 31 or 41 and think back you realize that you were just a child. Now imagine turning 51 or 61? How much do you think will have changed between your 40th and 60th birthday? Now imagine the future of the web.

Right now the web has reached an important milestone. They say that if you want to turn an activity into a good habit you have to keep it up at least 21 days. After that your brain and body are used to it and it will be easier to keep up. The Web is a well established good habit. It is here and has conquered a place in our lives and in our society.

Lets take a look at some short term developments for 2010. As expected the world won’t suddenly and drastically change this ear. But there are a few issues that will be worth following: 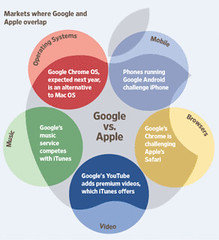 For a long time Google has been the darling of the tech industry. They were geeky, displayed good karma, offered great technology (for free!) and could ‘do no evil’ even if they tried.

It is clear that this is in longer the case. Google is now unavoidable, an effective monopoly, and the only choice for many services. With all the benefits that one choice brings customers aren’t revolting, yet.

But customers like choice. The hippest bar in town is hip until everybody knows it and then the hipsters move along to the next hip thing. For Google, there is no alternative.

With Google getting more aggressive in competing with other giants (in search, browsing, publishing and every other area they are expanding in) expect even more changes in customer perspective in 2010 where Google might become more like Microsoft (even though mostly in customer perception) than they could have ever dreamed.

Microsoft
The original monopoly has gone from stock market favorite and innovator to the butt of everyones joke in less than 10 years. With the lawsuits, the exit of Bill Gates and Steve Ballmers many public performances they gave journalists, bloggers and the general audience enough fuel for laughter and complaints to last a decade. The following 10 years will be instrumental.

Will the company adapt to a new world where the desktop is no longer the centre of computing? Will Bing turn into a serious competitor to Google? Will Windows Vista be a dud or the operating system that will lead the way to the future?

All these matters won’t be decided in the coming 12 months, but this year will mark either the return of Microsoft or the beginning of a death spiral. And yes, I’m well aware that Windows is still the dominant operation system. But who really cares about Operating Systems in the age of the Web?

Facebook
December marked the first month that Facebook generated more traffic, in the US, than Google. It might have been just an end of the year peak in traffic but it is revolutionary nonetheless. So far, traffic has been flowing from, through and around Search Engines. The fact that we still need search engines seems to suggest we are internally lost and searching for places to go. With facebook now taking so much time from us it seems we have found somewhere to be for the first time.

It could very well mark the beginning of a trend of the web becoming a place where you actually ‘do’ stuff instead of just ‘browse’ around. The ‘browsing’ paradigm fit the ‘old’ web very well. We browsed from homepage to homepage and from blogpost to blogpost never stopping to actually use, read or enjoy an individual site.

Maybe, after 21 years, we are comfortable enough with the medium to just stick around somewhere.

Certainly Twitter will grow even more this year. But how much? Will they double? Triple? Maybe even grow tenfold and be the first company to reach a billion users?

Whatever happens this year will be defining Twitter’s future. Somewhere in the 2nd quarter they will launch revenue making services. That will have a huge impact on its perceived value. If they manage to generate a lot of revenue the future will look bright. But if user growth slows down and revenue doesn’t look as promising as we hoped 2010 might as well mark the beginning of the end of its unchallenged growth.

All in all 2010 will be the most exciting and defining year for Twitter’s future.

Apple
The tablet. What will it be, how will it look and what will it do? And more importantly; how awesome, amazing and world-changing will it be?

Without a doubt Apple has shown that it can transform industries and build game changing products. Will this Apple Tablet be the launch of a new way of computing? Will it be nothing more than a bigger iPhone or better Kindle?

Whatever it will be it will be a launch as important as the launch of the first iPod and iPhone. 2010 will be the beginning, or end, of tablet computing and Apple will define it.

You
Last year Time Magazine’s most important person of the year was You. The consumer was at the center of the Web and the world turned around personalization, user generated content and consumer empowerment. Meanwhile computers, and the web, are still notoriously hard to use and are still not making our lives notably easier.

Since 1984 not much has changed in the way we interact with our PCs. Even today 90% of what we do is typing text. The first Macintosh could accept text 20 times faster than the fastest typist in the world could type.

So here we are, 36 years later, with iPhones that still don’t ‘get’ what I write when I want to write and desktop PCs that, after thousands or repeat entries, still don’t ‘understand’ that I am again writing my full name.

Our keyboards are still based on the QWERTY layout. A layout that was introduced to make us type slower so the keys on our mechanical typewriters wouldn’t get tangled up. I can (almost) live with the fact that we still don’t have flying cars. But the advances in human to computer interfacing are disappointing, to say the least.

I don’t expect any quick breakthroughs in 2010 when it comes to this. But I do hope we will see the start of more breakthrough technologies and exiting new innovation and inventions this year.

It is my belief that 2010, a new decade, will mark the beginning of The Web’s adolescence. In a few years we will look back and remember 2010 as the year that thing started to change. Not change dramatically but mature, evolve and crystalize.

As Alan Kay once said: “The best way to predict the future is to invent it”

If you do, lets us know, so we can blog about it.