Having a healthy level of entrepreneurship in their country is a great thing for governments, not least because it can be a significant source of tax income. However, to reap the fruits you first need to sow — or, relating to governments, to help aspiring startup founders to build their businesses.

While in countries with developed VC infrastructure, the help from angel investors and private VC funds can be sufficient to let startups grow, in emerging markets governments can really make a difference. We took a look at countries in Eastern Europe to see how their governments are working with entrepreneurs and what effort they make in order to stay attractive as a business destination.

One the world’s most recognized “startup nations,” Estonia, seems to have employed a complex approach to its entrepreneurship infrastructure. Birthplace of widely known tech companies such as Skype, TransferWise, and GrabCad, Estonia has created a fertile environment in which startups can grow.

Nowadays, there’s only one state-backed fund in Estonia, Arengufond, which recently switched from direct investments into startups to working as a ‘fund of funds’ together with private VCs. In December 2013, the Estonian government committed to put €60 million ($82 million) into the new entity.

For those who are not yet ready to look for even a pre-seed funding round, there’s a special start-up subsidy from the government, meant to make it even easier to start a new business. Its size depends on the circumstances and can reach up to €4,474.

In addition, Estonia attracts startups by its fast and simple bureaucracy. Registering a company in the country takes a few minutes for a local and a few days for a foreigner, while the country’s taxation system is one of the most liberal in the world. 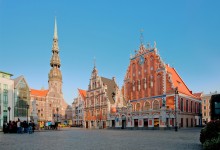 Latvia, in its turn, has a dedicated government entity, The Investment and Development Agency of Latvia (LIAA), the purpose of which is to support small business and ensure the growth of aspiring projects. The state seems to be very interested in facilitating small business as whole, without any differentiation made between the tech sector and other fields.

The Latvian government has introduced several grants that cover up to 50 percent of startups’ expenses related to IP protection, marketing, R&D activities etc. There are also subsidized loans and loan guarantees, as well as a few VC funds, most of which are, again, co-financed by the government.

All in all, Latvia looks to be investing huge amounts into growing its entrepreneurship ecosystem without a particular attention to the tech sector, and probably offers local startups biggest amounts of direct support in the Baltics, while other countries prefer indirect ways.

The third country of the Baltic region, Lithuania, does not seem to offer a lot of direct support to startups. However, it has a few VC funds operating under an EU initiative JEREMIE (Joint European Resources for Micro to medium Enterprises). The total amount of money controlled by those funds is close to €100 million ($137 million). In addition to that, there is the Baltic Innovation Fund with €100 million under management, co-financed by the governments of the Baltic states and the European Investment Fund.

And of course, Lithuania is as good as any other Baltic state in terms of simplicity of starting up a business. It also has recently started to attract game development startups.

In the Czech Republic, which is home to some international startups and bigger companies like Socialbakers, AVG, and Avast, the government surprisingly does not seem to be very busy offering support for entrepreneurs. There are no significant grant programs or funds, although the Czech state co-funded the Technpark Pardubice, which declared itself a bankrupt a year ago. 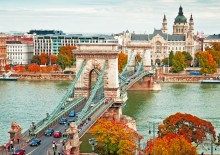 Startups in Hungary, as with Lithuania and other EU countries, has benefited from the JEREMIE program, under which some €128 million ($175 million) has been invested into local SMEs. The second part of the program is supposed to bring another €145 million ($198 million) to nurture aspiring entrepreneurs in the country.

As for the local government in Hungary’s capital city, it has formulated an economic concept called Runway Budapest – Start-up Credo 2.0.2.0, which consists of different measures of direct and indirect support for startups. Aiming high, the government has stated that its goal is to “turn Budapest into the start-up capital of Central and Eastern Europe by the end of the decade.”

In Poland, the support for tech entrepreneurs comes mostly through The Polish Agency for Enterprise Development (PARP), the total budget of which between 2007 and 2013 was €7 billion ($9 billion). The money comes from EU funds and is used for a wide range of initiatives, from providing grants for entrepreneurs to founding more than 40 business incubators.

There’s also research that confirms that Polish startups are mostly financed by EU-wide programs and not by the local government. It notes that from 2008 to 2013 the European Regional Development Fund had invested €786.5 million ($1 billion) in 5,938 Polish projects.

The government of Slovakia has not been idle in the recent years and has made some effort to support and grow the country’s startup ecosystem. There is a state-owned VC fund, the Fund of Innovation and Technologies, as well as two funds financed by the EU-wide JEREMIE initiative.

In addition to that, every six months, four of the best Slovak startups are selected and sent to Silicon Valley for acceleration at the state’s cost under the Slovak Start-up Development Program.

Slovenia, a country with 2 million people and one of the highest tax burdens in the world, has managed to grow a decent startup community in the past few years. Local entrepreneurs don’t credit the government for that, however there are state grants of up to €72,000 ($99,000) and a matching scheme for VCs, on which Slovenia spent €35 million ($48 million) in 2011.

There are also certain EU-wide programs available in the country, though startups here are mostly bootstrapping, and the entire infrastructure seems to be built by enthusiasts and entrepreneurs themselves.

In the the European part of the CIS, the governments willingly declare their full support for small business and startups, and in some cases really do make an effort, however it’s not always enough.

In Belarus, there’s one way the government can directly help a startup with funding, and only after the startup has taken out a loan in a Belarusian bank. Even in this case though, the startup receives little real money as it’s used to partly pay for the loan. The local media say the amounts in question usually run into four figures (in US dollars).

On the other hand, Belarus has the government-backed High Tech Park, residents of which are exempt from all corporate taxes but pay one percent of their turnovers to sustain the park itself. The employees of the companies based in the park have their income tax lowered to a flat rate of nine percent, which makes a good incentive to work for a tech startup (the normal income tax rate in the country is 12 percent).

Among the HTP residents are famous Belarusian game development companies like Wargaming.Net (“World of Tanks”) and Nival (“Prime World”, “Blitzkrieg”).

In addition, currently the Belarusian government is considering an idea to start reimbursing the organizers of startup events up to 50 percent of their expenses.

The only sign we can find of support from the government of Moldova for its startups is a document about developing the IT industry, which was published in Moldovan in early 2013. It says that four incubators and three “innovation centers” were to be opened, however to date there’s no trace of the state fulfilling its promises.

Russia, the biggest CIS country, has a much stronger and broader governmental participation in the startup community. The biggest player on the field is RVC, a state-owned fund of funds launched in 2006 “to encourage Russia’s own VC industry and boost capital of VC funds.” The fund has about $832 million of state-owned money under management and invests only together with private VCs.

Another supposedly state-backed effort is Internet Initiatives Development Fund (IIDF, or FRII in Russian). Launched in 2013, it has a mission of creating a network of accelerators and investing a total of $184 million into Russian startups in three years. The fund’s capital comes from unnamed private companies, though local media have it that Vladimir Putin himself could be persuading them to participate; in addition to that, the plan of launching IIDF was first expressed by Putin back in 2012.

In addition, there are quite a bunch of smaller and local state initiatives in Russia to help startups get to their feet, as well as several technology parks with Skolkovo being the biggest and most well-known example.

In Ukraine, development of the startup infrastructure is mostly carried out by a few enthusiasts and privately owned VC funds, while the government has yet to offer more than promises. Of the latter, there were plans in 2012 to launch a state-backed $10 million VC fund, which never flew.

Another plan is a national project dubbed “Technopolis” aimed at “creating the infrastructure for innovations and high-tech.” The only physical manifestation of it is the Bionic Hill technopark that is being built now in the outskirts of Kiev. Unfortunately, it’s obvious that nowadays the government of Ukraine has much more urgent things to care about, which probably means that in the near future startups and funds will have to rely only on themselves — same way they did before.

The situation with government involvement in the startup infrastructure in Southeastern Europe is very uneven, as in some of the countries usually referred to as West Balkans — namely, Albania, Bosnia and Hercegovina, Kosovo, Macedonia, and Montenegro, — there are no state-backed initiatives to talk about. There is, however, an institution called Western Balkans Investment Framework (WBIF), which is supposed to become the region’s VC fund and pour €40 million ($55 million) into local projects.

In the two other countries of West Balkans — Croatia and Serbia, — the situation is a bit better, especially given that Croatia has already become an EU member, and Serbia recently began EU membership talks. The governments of both countries declare their interest in supporting startups, particularly in the field of technology.

The Croatian government has been running an Entrepreneurial Impulse program since 2012. It consists of simplification of the procedure of starting up a business, VAT exemptions for small businesses, as well as a funding program.

In Serbia, the government also has a Program of Support to the IT Industry. Among the initiatives under this program are joint seed funding with private investors (up to €25,000 / $34,000), state-funded incubators and technology parks, and tax credits.

Last but not least come the other two countries of the region, Romania and Bulgaria. The former has at least two governmental programs to support small business (without particular attention to the IT though), while Bulgaria can boast one of the lowest corporate taxes in the region with a flat rate of 10 percent. In addition to that, Bulgaria is home to two startup accelerators, LAUNCHub and Eleven, which are both funded by the EU and have a total of €21 million ($29 million) under management.

From outsourcing to entrepreneurship

All in all, most of the Eastern European countries nowadays clearly show a gradual switch from being outsourcing destinations to emerging as startup and entrepreneurial nations and becoming important innovation hubs.

The degree of support of this movement from the governments differs significantly. However, it’s safe to say that all of them at least declare their willingness to develop the startup spirit. And this is a good start, at least.