This article was published on January 8, 2012

Would you fly to Puerto Rico if you had somewhere to crash for a few days? If so, you may be interesting in hearing about the couchsurfing offer that Startups of Puerto Rico is working on.

The plan is for local members of the startup community to play host to other techies in exchange for their knowledge; but this is only one of the many initiatives that this new group plans to develop to put their island on the startup map. So, what is Startups of Puerto Rico (SoPR)?

From BarCamps to Startups of Puerto Rico

SoPR is a very recent initiative with ambitions to kickstart the island’s startup community. Its website was launched just before Christmas by a small, independent group of startup-oriented people in Puerto Rico.

However, it hasn’t come out of the blue; its launch follows a series of tech events in Puerto Rico, which started with BarCamps in San Juan, and recently culminated with TEDxSanJuan.

According to the local entrepreneur Ramphis Castro, who was also the organizer of Puerto Rico’s first Startup Weekend, using well-known names boosted these events and helped many local techies come out of the woodwork.

While TEDx could only welcome a hundred participants, its organizers received over one thousand requests to take part – not bad for a territory with 3.7m inhabitants.

Following the event’s success, Castro and other entrepreneurs decided to seize this moment to create SoPR, which they describe as a tool to serve the existing community and help it grow.

It’s worth keeping in mind that all these events are quite recent; none of them existed a few years ago. As the Puerto Rican computer engineer Hector Ramos pointed out in a blog post about SoPR, “the startup community in Puerto Rico is still very, very young. It’s almost non-existent.”

According to Castro, this has a lot to do with Puerto Rico’s brain drain. There aren’t many IT job offers on the island, and the vast majority of computer science graduates end up joining big foreign companies and leaving Puerto Rico. The temptation is strong for them, and even stronger than in the rest of Latin America, since moving to the US as a Puerto Rican is much easier.

Castro knows it first hand – a few years ago, he received a job offer from Microsoft, but decided to stay. “We have to create opportunities ourselves,” he says.

It doesn’t mean there aren’t any wannabe startupers in Puerto Rico. Yet, according to Giovanni Collazo, who co-organized Puerto Rico’s first BarCamps and Startup Weekend with his business partner José Padilla, “the community isn’t organized, and people don’t know each other” – hence these events.

Making the most of Puerto Rico’s assets

As a Global Facilitator for Startup Weekend, Castro had the opportunity to attend the event’s local editions in Colombia, and he’s convinced the problem there in the same. Actually, many Latin American countries share the same difficulties, although each of them also has its specificities (see our post ‘2011 Tech Rewind: This Year in Latin America‘ and our story about startups in Central America).

When it comes to Puerto Rico, its main asset is its association with the United States. Beyond geographic closeness, local entrepreneurs also know American legislation very well.

For Castro and his friends, this means that the island could become a great bridge between Latin America, the Caribbean and the US. Besides having access to the American market, companies that export tech from Puerto Rico benefit from tax exemptions, he notes. While this has only attracted big companies so far, this could also appeal to startups, he thinks.

Yet, the main reason why Puerto Rico could become a bridge is its entrepreneurs, who seem much more familiar with its tech scene than many of their Latin American counterparts. SoPR’s creators themselves are following what’s going on in Silicon Valley very closely; one of them, Marcos Polanco, produces a podcast based on Steve Blank‘s blog. 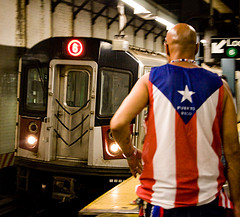 As for the “youngest ever Y Combinator entrepreneur”, Tyler Diaz, he comes from Puerto Rico and joined the accelerator when he was only 17.

As a matter of fact, Puerto Ricans spend more time in the US than people from other Latin American countries, and they often migrate to NYC. This means that the connection goes beyond Silicon Valley. In other words, there is talent coming from Puerto Rico.

The first step of many

More often than not, these Puerto Rican expatriates are keen to give something back to their homeland. One of the ambitions of SoPR is to give them a chance to share their knowledge with wannabe entrepreneurs.

At the moment, its efforts are focused on building an index of Puerto Rican startups – which isn’t easy as it sounds. While the site’s creators received dozens of submissions from tech-related local businesses over the last couple of weeks, they now need to define the criteria for a company to be listed.

However, SoPR has much bigger goals for 2012 than building an index. According to discussions on its Google Group, it hopes to create a structured seed fund which focuses on startups and understands them – there’s no such thing in Puerto Rico right now, Castro says.

There aren’t any accelerators either, at least in the way they are defined in the US – only incubators, Castro explains. Again, this is a gap SoPR hopes to fill – the group is currently negotiating the launch of a local Founder Institute, and thinks the island also has what it needs to attract an accelerator similar to Y Combinator or TechStars.

Beyond the support of the local startup community and of Puerto Rican expats, SoPR also plans to call on the help of foreign geeks. Many of them already come to Puerto Rico on holiday or for work, and would be more than happy to help build a local tech scene on the island – hence the couchsurfing project we mentioned in the introduction. It also goes both ways, and SoPR is also planning to organize a field trip to the US later this year.

SoPR has big ambitions and a long-term vision for Puerto Rico; be prepared to hear about it again in the coming months.