Starbucks, the ubiquitous coffee chain is launching its payment app for Android users in the UK and Canada.

The iPhone app arrived earlier this year and caffeine fans can make use of the app in 700 stores around Britain as well as a selection in Canada.

The free app is linked to customer loyalty cards and it enables users to make their purchase with one touch.

The coffee company has seen a 70% increase in Starbucks Card Rewards users in the UK over the last 12 months. With that user base already in place, the further release of the mobile app can tap right into that existing audience. 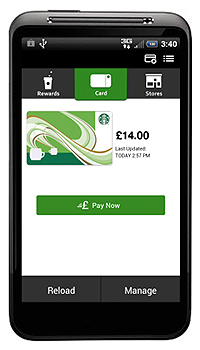 Whether it’s credit, debit or loyalty cards being used as an alternative, one in three Starbucks UK customers don’t use cash to pay for their purchases. This certainly points to a trend for UK customers moving away from cash in their pockets.

Starbucks says that the use of a mobile app also speeds up service, saving around ten seconds per transaction. So, depending on how long you might have been in a queue, it might be a handy option. Most people travel with their mobile, so you might as well make use of it in real world situations.

Ian Cranna, Starbucks UK and Ireland VP of marketing says, “With the summer’s events approaching, the next few months will be an especially busy time, particularly across our London stores. Our mobile payment app has proven extremely popular amongst iPhone users and is the fastest and most convenient way to pay. Now many more customers with Android phones will be able to get the benefits of speedier service through using the app. Even if you leave your wallet at home, you can still come to Starbucks and get a fantastic cup of coffee.”

So if Starbucks is your flavour and Android is your weapon of choice for a pocket rocket, it looks as though you’ll be set for getting caffeinated wherever you go.

What other things would you like to buy with your mobile? Are you ready for a cashless society?