Mobile platform provider StackMob has just announced two things that will probably be of interest to application developers. Starting today, the company is rolling out its very first “app store-like” marketplace that will contain a library of developer-ready API modules both from StackMob and other technology partners. In addition, it is also eliminating transaction-based API call fees and says it will charge developers for what it calls premium functionality.

StackMob’s news comes fresh off the heels of competitor platform, Parse, announcing its integration with Twilio. 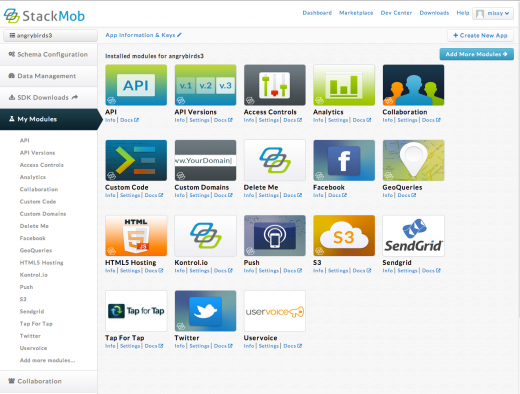 For the 40,000 apps supported by StackMob, these two updates are pretty significant. With the marketplace, developers can install, integrate, and grow their apps using functionality from services like Apsalar, Crashfeed, Innveractive, SendGrip, Urban Airship, UserVoice, and more. Ty Amell, CEO of StackMob says that for rapid app development and to meet customer demand, developers need to have a way to “quickly and easily leverage best-in-class solutions from many different technology partners.”

StackMob’s marketplace will be integrated into the platform’s dashboard and the company says that developers can simply select the API module that they would like to use. Any billing is handled right from the company and developers will get a single invoice without any premium charges added on top of the cost of the module.

As the popularity of a service grows and more developers incorporate API feeds into their apps, the one thing that they risk is the huge transaction-based API call fees that they get every time the service is being used. StackMob says that through its updated pricing structure, it has eliminated that in order to shift its focus on value-added services. Developers will now be charged for services like running complex custom code on the company’s servers or extending an app’s feature with third-party integrations. It could be one of the first companies to “eliminate the ‘success tax'” for developers.

StackMob has processed over 300 million API calls and could potentially rake in some money had it not changed its pricing model. Now the company’s 15,000 customers will find more savings since that they won’t need to worry about coughing up more money to support their app.

This is the first major announcement to come from the company since it announced its support for HTML5 earlier this year, making it a highly flexible platform. It has raised $7.5 million in funding from Trinity Ventures, Harrison Metal Capital, and Baseline Ventures in its two year history.