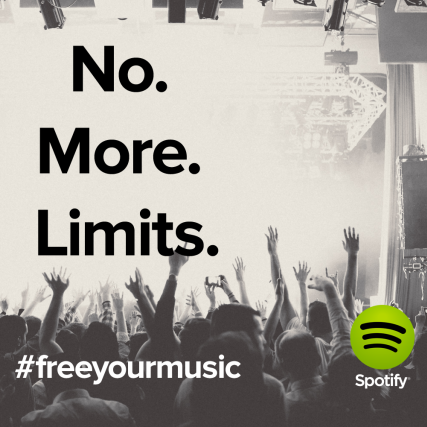 Update: The restrictions only ever applied to some countries in Europe and Asia, NOT the US. The full, original report can be found below. We originally reported on these plans back in December.

Music streaming service Spotify has dropped the time limit that used to govern usage of its Web and desktop apps. From today, users in the US, UK and a handful of other countries who were restricted to just 2.5 hours of music per week — a limit that was in place once a six-month ‘grace period’ had passed — can listen for as long as they please, although they will still be subject to ads, as TechCrunch reports.

The change follows the launch of a free, shuffle option for the Spotify mobile app — both of these moves are designed to tempt users to sign up to its paid-for service, priced at $9.99 per month. Aside from getting full access to the full music library on a mobile device, Spotify premium is also ad-free.

By providing greater access to its product, the company is hoping more of its users step up and pay for its full service — currently just six million of its 24 million registered users do. It can expect even more competition next week, when Beats debuts its music steaming service on January 21.