It’s not often TNW gets to see pitches from South Korean startups while in the UK. But as part of the Global K startup program, a handful of companies appeared at the Google Campus in East London and showed off some pretty hot ideas.

The Global K program is essentially an incubator which includes service development, expert opinions, tech and management training and investment introductions. The pilot program appeared in 2012 with 87 applicants and 5 projects supported, this year 246 ideas were submitted and 30 projects were accepted.

Startups are chosen early in the year and then put through their paces for 6 months. After 6 months, the best ones are taken further and funds of up to $90,000 are provided for continued growth. These companies head to London and Silicon Valley to meet investors.

Today they presented to a panel of advisors made up of Ivan Farneti of Doughty Hanson Technology Ventures, Nina Faulhaber of Index Ventures, Gilad Novik of Horizon Ventures, Tom Allason CEO of Shutl, Alexander Trewby co-founder of Enterproid and yours truly. The gathering was organised by Eze Vidra, Head of Google Campus London.

The startups at the Google Campus today presented quite a mix of ideas. It’s refreshing to see how these businesses tackle problems and aim to create businesses through their solutions. 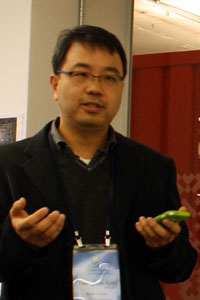 First up on the show and tell was Brain Garden, a vocabulary learning iOS app where students grow a garden of flowers that can be earned through repetition. There are elements of gaming in the app, users can ‘own’ a  word and others then pay them loyalty – inspired somewhat by foursquare.

The application make money through in-app payment for word books. Levels span from basic through TOEFL and GRE learning standards.

Youngahn Kim made the presentation. He said that memorizing vocabulary is ‘tedious, painful and lonely’; he’s not far off on that. With BrainGarden, the startup hopes to generate revenue by partnering with educational institutions and publishers of language courses who hope to make the process a bit more fun.

The next up to present was John Jung of Figtree Labs. He presented an app called Whatugot, which basically presents a mix of products you like, things you already have and maybe things that you make from music, fashion, pets and important moments captured in images.

The app is beautifully presented, however the offering is a bit mixed. It’s tricky to define the service when it is trying to encompass so much. The features within the app are rather nice though, music can be selected from what you are playing on your device and a social element arrives in the form of a page with people who have similar tastes.

The app looks good and curiously Jung is looking to bring it to a Western market at the moment rather than aiming for his own back yard. If the design principles are applied to a more focused proposition, this could be an interesting way for users to present their personal style and build profiles.

Jae Hyeon Cho stepped up next representing ClassTing. The aim of the service is to provide a web and mobile application for classrooms. Students make profiles and add themselves to their classes, teachers can send out news, updates and homework tasks.

Rather than just being about a new way for teachers to nag their students, it also has a strong social element where pictures from say, school trips, classroom activities or other events can be added to create an ongoing yearbook of sorts.

The app can also be used to connect with other classes around the word and over time alumni can use the app to create meetups after they move on.

It’s nicely presented and frankly there was nothing half as cool as this when TNW writers were at school. It’s about time education was dragged into something like this.

Last but not least was one of the most developed startups of the batch. Malang Studio’s Michael Hong stepped up and laughingly explained that he does seem a bit older than most of the others in the startups, but he is co-founder of a company that has equally young and talented employees – interestingly most of which are listed as official Samsung software programmers.

The main product out of Malang Studio is AlarmMon. Basically an alarm for your phone which brings cute animated animals with complete back stories to the process of waking up.

It’s an interesting proposition, for those who can see straight when they wake up. Instead of a blaring alarm, a two-minute game with a character like Henny Penny, Friendly Bready, Black Cat or Tiny Farm sheep might put you in a better mood for the rest of the day.

Hong described possible future versions of the application including known cartoon characters and even advertising to help bring in the money. Though we’re not too sure about being woken up with an ad, the idea of being able to choose your favourite characters is a neat one.

“We’re like the Rovio of the lifestyle space,” says Hong. Well, if they can making waking up more amusing each day, then he might just have a chance at ensuring that is true.

Overall the presentations were slick and the applications were really very interesting. Nothing seemed half thought through or looked like a direct clone of existing ideas.

Maybe being that many time zones ahead of the Valley means not being so easily influenced by existing companies and working out interesting ways to do your own thing. The companies head to Silicon Valley tomorrow and we wish them all the best of luck.