SoundCloud has rolled out Google+ Sign-In to its iOS and Android apps, adding to the existing options of Facebook and email.

Then, just a few weeks ago, Google also announced it was “bringing app activities to Google Search” through Google+ Sign-In. Essentially, this means that if you search for a site or app on Google (assuming it has Google+ Sign-In integration), you’ll see popular and aggregate user activity within the search results page.

The launch partners for this were given as Deezer, Fandango, Flixster, Slacker Radio, Songza, TuneIn and SoundCloud, so this latest update was expected. 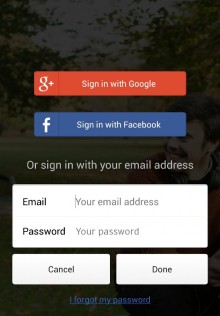 The SoundCloud Android app was pushed live last week, while the iOS update is available in the App Store from today. Indeed, the latter of these has also now added Google+ sharing into the mix, designed to make it easier to share audio with your Circles on Google’s social network.

Back in March, SoundCloud opened up Sets to its mobile apps, a feature that lets users build collections of sounds they like in a single clip or waveform, which can then be shared and reposted by other users.

Another small update for the iOS version too – it has restored the Airplay icon within the audio player, making it easier to turn on the streaming option.