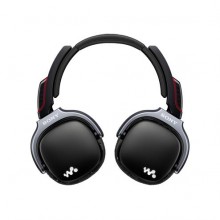 These padded, over-ear cans aren’t particularly memorable to look at, but it’s the all-in-one feature set that makes them so intriguing.

Sony is selling them in two models, the 16GB NWZ-WH505 and 4GB NWZ-WH303 (rather uninspiring names, we agree). Both will last up to 20 hours on a single charge, although users can get an extra hour by plugging them in for a rather snappy three-minute period.

The premium version elevates the bass with a 40mm dome type headphone driver unit, while the NWZ-WH303 has a slightly less ambitious 30mm version. Audiophiles can shift their favorite tracks across from a Mac or Windows machine, and both models sport a small, illuminated LED Walkman logo for a stylistic flourish.

The WH303 and WH505 headphone-speaker-digital music player combos are priced at £99 and £179 respectively, and available from October.