Almost everyone uses some form of music streaming service these days and there’s a never-ending list of options: Spotify, Pandora, Deezer, Rdio, Google Play Music and 8tracks are just a few among the ton of services out there. However, you probably have little time to actually listen to all the music on them.

As someone who obsessively searches for new bands, I tend to like, favorite and add tracks to playlists across a multitude of services. However, they are rarely listened to again because it’s hard to remember where I left off — and I simply have no time to listen to them all.

After picking up a pair of Sonos’ new Play:1 speakers for our apartment though, I was amazed by just how much a Sonos setup transformed my listening habits.

For this review, I tested a simple Sonos setup of two Play:1s and a Bridge. The speakers can be used with a wired network, but the company touts that its sound system creates a dedicated wireless network just for sound — so you’re required to purchase its wireless bridge to use the system wirelessly. 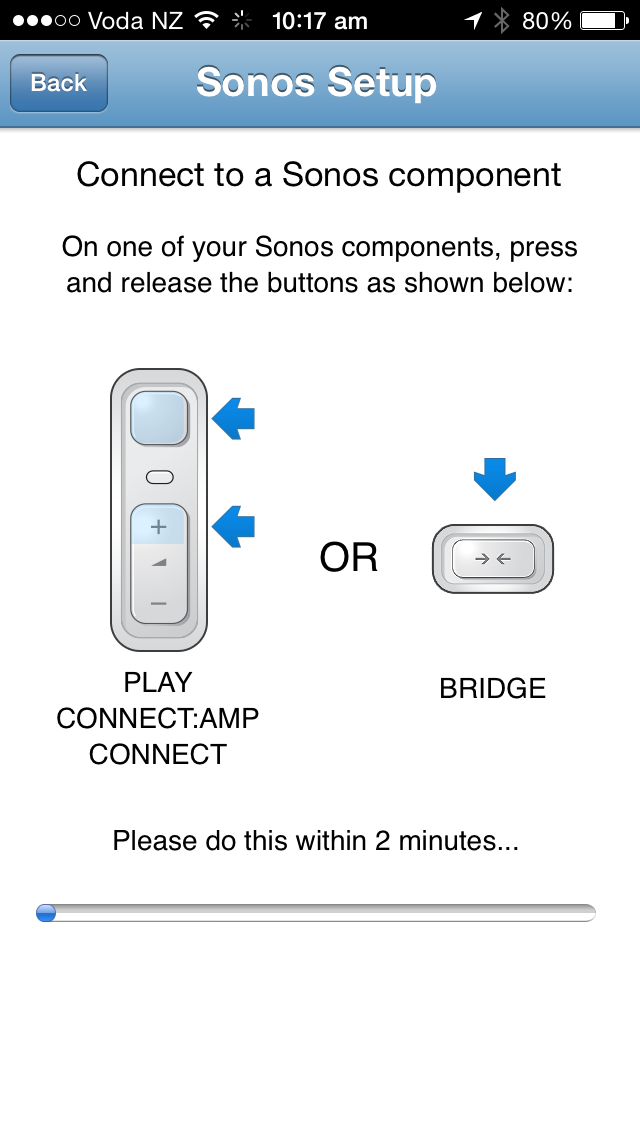 One of the largest drawcards of Sonos’ products is their ease of use, and the setup didn’t fail to deliver. Once unboxed, you simply plug the bridge into your wireless router and then plug at least one of the speakers directly into the bridge.

To get started, download the iOS, Android or desktop Sonos app. Subsequently, it’s as simple as pushing a button on the top of one of the speakers (or the bridge) to set up the system, and just picking a name for the room it’ll be placed in.

To add the second speaker (which I put in the bedroom upstairs where there’s no network cable), just repeat the same two-step process. It’s so delightfully easy that it’s hard to believe that’s all you need to do. 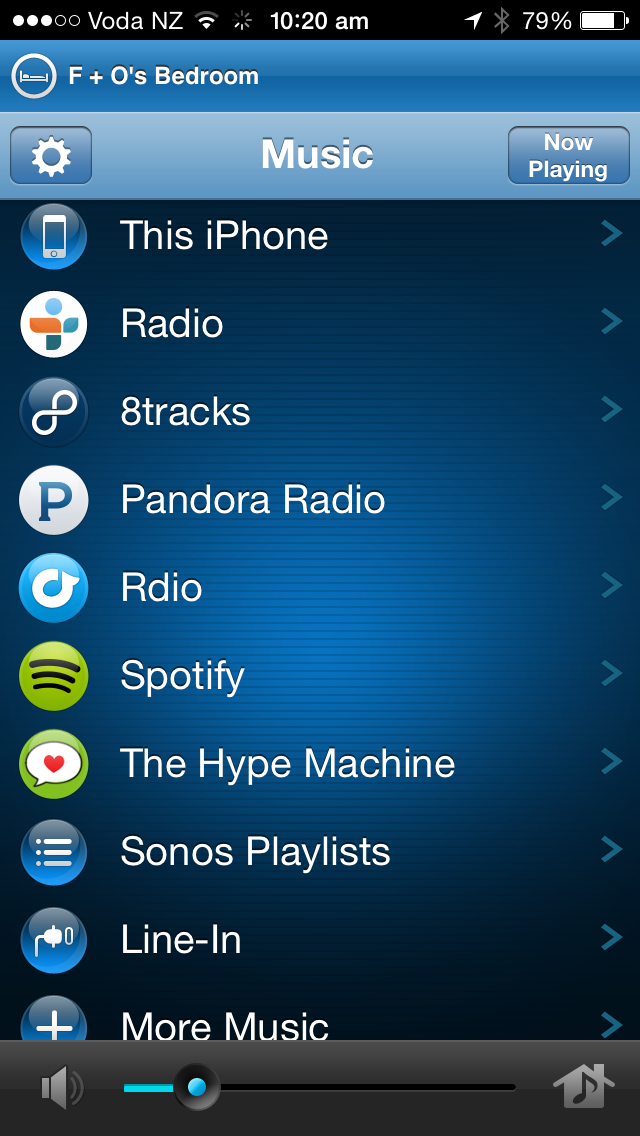 With the setup done, it was time to add a few streaming services to get a good selection of music. I added Rdio, Spotify, Pandora, Hype Machine and 8tracks in a matter of minutes.

From here, all I needed to do to play music was to select the service I wanted to stream from and pick a playlist, track, album or artist. To get the most out of Sonos, it’s best to download the app onto every device in the house. There are apps for tablets, smartphones and desktops which can all control the system at the same time.

When I first picked up the Sonos, I had expected it to function in a similar way to Apple’s Airplay, but that’s not the case at all. The streaming services you link to the Sonos setup are linked to the system itself and the apps on your phone or computer are simply remotes. This means you don’t actually use the official Spotify or Rdio app to stream music — it’s all done from within the Sonos app.

This was a weird concept to wrap the mind around at first — but this means once music is playing through the speaker, you can actually switch off the device you played it from and the music will keep playing.

You can also easily control the music from any other app or throw new songs at the speaker. Essentially, all of the users in a particular house can have the controller installed, so they can play music whenever they want. 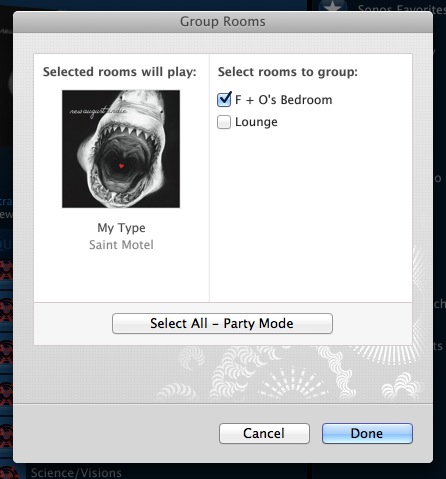 When playing music, you pick a track and choose which rooms to play it in. It’s effortless to play music within a specific room or the whole house simultaneously, and as you get more speakers this only gets better. If playing a particular track in the whole house, the music is always perfectly in sync and it’s fantastic to walk to the other end of the house and hear the same track playing at the exact same moment.

This is one of the reasons Sonos is so compelling — because we could play music in any given room (or different music in different rooms), it meant there was something playing at almost any time of the day. It’s addictive.

But, the true magic lies in how well Sonos ties together multiple streaming services, as well as the content from my iTunes library. It brings together siloed music services from across the Internet and makes them all available in one consistent interface. This meant that I was more inclined to use multiple music services.

It’s impossible to explain in words how good the audio projected by the Sonos speakers was. I was blown away by just how much sound the speakers delivered, despite their small size. Sonos sells its speakers with the promise that they will “fill your room with music” and they deliver with deep, powerful bass and clear highs.

The Sonos speakers also let you set alarm clocks using any music source, which fade in to wake you up. It’s nice to wake up to music and even nicer to ditch the worries of whether your phone alarm will ring.

There’s only one major drawback with the Sonos setup — and that’s the lack of updates for its mobile apps. The apps are very confusing to use at first and look extremely dated, since the last visual overhaul was back in 2009.

At times it can be easy to get lost in menus on the apps and it’s often unclear what will actually happen if you click some elements, resulting in a pretty high learning curve for new users. That said, after a few days of using the system and becoming familiar with how it works, it was no longer an issue for me to put on new music quickly.

The Play:1’s design is quite striking and looks good in the home, as opposed to many other speaker systems. Lots of our visitors were shocked when they learnt that Apple didn’t design them. The devices are simple and unassuming, with only a mounting screw and network port interrupting the speaker grill on the back.

There’s only one warning I should give about the Sonos speakers — they’re so good that you’ll be hooked once you buy just one and you’ll want more speakers almost immediately. Despite having two Play:1’s in our home, I’m already trying to find a reason to purchase the Playbar for my home theater and a few other Play:1’s to fill the rest of the house (the best part is that the Play:1’s are humidity proof, which is enough to work in the bathroom!).

The Sonos setup has changed the way I listen to music because it brings everything I love into a single app and makes it easy to play my choice of music in any room (or the whole house) with just a few clicks. No more plugging in devices, messing with cables or settings on stereos — just click and play. There’s always something different playing in our house now, because it’s so easy for anyone to play something.

If you love music and use streaming services, Sonos is the system for you. The up-front price of some of the devices may seem high at first but it’s worth it, considering just how much you’ll use it once it’s there. Sonos is a frictionless way to play music and this ultimately means you’ll listen to more music than ever before.