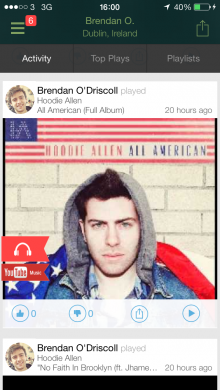 Soundwave, the mobile app designed to let music fans share their taste with friends in real time, has rolled out an update that offers support for YouTube. Users who listen to music via YouTube on their iOS or Android device will have it shared via Soundwave just the same as with the audio players the app already supports.

The videos play in-stream within the Soundwave feed for others to enjoy, and the Irish startup says that it has developed filtering algorithms to ensure that only music is shared to the app, not any other videos that you watch. There’s a vast group of (largely young) consumers who use YouTube as as a free music player, so Soundwave is wise to expand its potential user base this way. Soundwave boasts 750,000 downloads since its launch in June this year, with the highest numbers of users in the USA, Russia, the UK and France.