When Sol Republic announced the Tracks Air towards the end of 2013, I was pretty excited to try them out. Alas, as a UK-dweller, the US-only release was beyond my reach.

Now, however, with a UK release on the horizon, I met up with Seth Coombs, co-founder of Sol Republic for a chat about his headphone addiction, ‘smart’ headphones and the impending UK launch. He also gave me a pair of the company’s new Tracks Air wireless headphones to try out. Having tested the slightly boomy Calvin Harris-tuned Mater Tracks XCs, I had high expectations.

If they could deliver anything like that level of performance without the hassle of wires, what more could I ask for?

Someone designed the hell out of the packaging- in a good way. Everything is neatly tucked away, makes sense and looks like a premium product – as you’d want for a pair of headphones that cost $199. They’re by no means the most expensive, but $200 for headphones is definitely a purchase worth considering.

As with other headphones from Sol Republic, the Air Tracks use an interchangeable headband system which means you’ll need to assemble the earpieces and band yourself. Just slide each earphone onto the band.

Pairing your device is easy too. The headphones are in pairing mode automatically when you switch them on, and can be paired with devices via the traditional Bluetooth route or via a quick tap of the right ear piece thanks to the NFC chip inside. Each time you do pair them, you get an announcement telling you roughly how much listening time you have left. It’s a nice touch that saves fiddling around with little indicators, although the power button does also change color to indicate different states.

Sol Republic says the headphones should last for 15 hours of voice calls. Keen to hear what they sounded like, I didn’t charge them before getting stuck in as my unit reported 7 hours use out of the box.

It’s hard to say if the battery lasted for exactly seven hours or not – I rarely wear headphones for that long in one sitting – but it was at least three days later before I found myself plugging the micro USB in to charge them for the first time. From fully charged, the headphones always reported that there was “more than 13 hours remaining”. Charging from nearly depleted to fully-juiced didn’t take too long either.

If for some reason you forget to charge them for days on end, or just spend 13 hours a day listening to music, it’s good to know that there’s a wire included in the box in case the battery dies. The cable also includes a button for answering calls and starting/stopping music playback, but no in-line volume control.

For devices that don’t have NFC, you can pair the headphones by finding the Tracks Air in your listed Bluetooth devices.

A particular pet peeve of mine is headphones that become useless because the smallest part on them breaks. Thankfully, like most of Sol Republic’s other over-ear headphone offerings, the Tracks Air use an interchangeable system – so if you do break the headband, or lose it somehow, you can just slip the earpieces on to a new one.

The earpieces themselves are considerably smaller than those found on the Master Tracks XC  and have slightly less padding. Nonetheless, they’re still comfortable enough for a few hours of uninterrupted listening; after this, I found I needed to take them off for a bit, not that they’re overly tight. In fact, they walk a nice balance of staying snugly in place when you, for example, look down at the ground or need to bend over, but aren’t so tight as to be uncomfortable.

On the right earpiece there is a volume control rocker, a button for answering calls or controlling music playback and a power button for switching the Tracks Air on and off.

There are also dual microphones so that the headphones can be used for taking voice calls; while this seemed to work well when indoors, there were a few complaints about line quality from the other end, particularly when outdoors.

One area in which the Tracks Air didn’t quite live up to their promises is in the Bluetooth range – the company says to expect up to 5 times the regular reach of normal Bluetooth devices (around 150-feet), but for me it was more like about 30 – 40 feet, still enough for my needs at home though. And if I’m more than 40-feet from my phone in public then something is amiss anyway.

There’s also the option to have the Tracks Air paired with two devices rather than just one (to save swapping over constantly if you frequently use them with your phone and laptop, for example), but this is switched off by default as it decreases battery life. I also found that the connection was a little choppier when paired to two devices, and experience no issues with just one, so switched it back again. 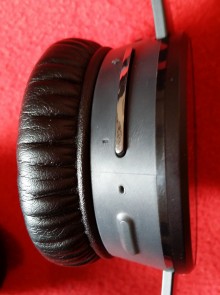 To get into the menu, you just need to hold down the power and call button (shown right, below the volume rocker) at the same time until you hear the voice prompts.

While the sound of the Master Tracks XCs perhaps wasn’t that refined, it was hard not to love a product that put a smile across my face simply from using it. The Tracks Air was a similar experience.

Like many over-ears, the Tracks Air ‘A2 Sound Engine’ gives a fairly robust bass kick – particularly for wireless headphones – but it would be difficult to describe it as perfectly well-defined. It’s pleasing, for sure, and not overly boom-y, as some other headphones can be.

It’s pretty much the same story for the mids and highs too – if you want a set of headphones kick across the board, then the Tracks Air are well worth checking out, although it’s a different sound profile to some of the other alternatives on the market. If, however, you like perfectly unadulterated, natural sounding headphones, the sheer attitude of the Tracks Air sound profile could grate.

For me, however, they’re pretty close to perfect; a good balance of kick across the range, but they manage to retain a pretty crisp sound without becoming muddy.

Did I mention that they’re seriously loud too? Well, they are.

If the battery dies, or you just decide to wire them in for a listen, you’ll get pretty much the same experience. And, naturally, the quality of the sound you get out depends in part on the quality of the files you’re listening to.

I also listen to a lot of podcasts, and can happily report that voices don’t end up sounding tinny or unrealistic, although these probably aren’t the best headphones if you listen to more spoken word than music.

I feel like there’s a confession needed: I’m no audiophile. I used to DJ a bit and still listen to a pretty wide range of music, but I make no claims to ever know what’s cool or current. What I do know, however, is that just like when I first put on the Master Tracks XC, the Tracks Air put a big smile across my face, and that’s really hard to argue with.

Considering they’re Bluetooth and not wired, the sound quality is all the more impressive. I hadn’t really considered wires particularly bothersome for over-ear headphones before, but now whenever I have to wear another pair I find myself wishing they were wireless. Even the Master Tracks now feel a bit too much in some situations – nowadays, they stay firmly connected to my desktop computer.

One point of disappointment around the Tracks Air is that the leakage (the amount of sound others around you can hear at high volumes) is pretty significant – if you crank it up to the max with these on, people around you will know it, but then that’s partly testament to the sound that they can actually deliver when you push the volume up.

If you’ve got about $200 burning a hole in your pocket and are looking for a set of Bluetooth headphones that can easily deliver all day listening and a punchy, relatively balanced sound, keep the Tracks Air near the top of your list. I will be.