MIT Media Lab professor Cynthia Breazeal has launched a crowdfunding campaign for Jibo, a cute little robot that will help out around the house.

Breazeal is considered one of the front-runners in the field of social robotics, which aims to create robots that we can communicate naturally with and that fit within expected societal roles.

Jibo has a swiveling display for a head and a free-axis base. He includes a camera that can employ facial tracking in order to follow you around as you move. Jibo will stand roughly 11-inches tall and weigh six pounds.

The launch video for Jibo showcases some of the things he can do, such as serve as the family cameraman, remind you when you get messages, tell stories to your kids, act as a telepresence device, manage your smart home, and order food for you.

These claims might sound futuristic, but if anyone can deliver on these promises, it’s Breazeal. While Jibo’s functionality is definitely exciting, the robot’s real potential lies in his social and emotional skills. If Jibo manages to humanize technology, he will have made a significant step toward a better future. 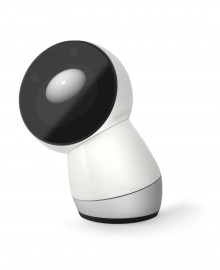 Jibo is scheduled to ship to developers in the third quarter of next year and to consumers in the fourth quarter. Consumers can pre-order the device for $499 (with $99 down) with access to a hobbyist-level SDK, while the developer unit will cost $599 and include access to a pro SDK for deeper integration. Jibo will function as an open platform, so developers can dream up new ways to extend his capabilities.

The initial goal for the crowdfunding campaign is $100,000. Jibo also has VC investors that are supporting the project, so the startup isn’t solely relying on pre-orders to ship the product. As you’d expect, one of the primary goals of the campaign is to engage the community and get input from early adopters on how they want to see the device take shape.

Curious about what this little bot can do, we spoke to Breazeal about the project.

“Jibo is the world’s first social robot being brought into the home,” she said. “In the world of robotics, this is a big thing.”

In her research, Breazeal set out to answer the questions: how do you design robots that people can live with? How can they live with it and actually derive real value?

While many robots are designed to be used by the computer scientists that build them, Jibo is intended for people who aren’t computer experts.

Breazeal envisions Jibo having an impact on fields like education and health care where “high-touch engagement” is crucial. Jibo could also serve as a human-like assistant in industries where resources to employ additional people are constrained. For instance, a social robot could function as a supplemental health coach or a personal tutor. Robots are unlikely to fully replace humans for those jobs, but they can help out during times when it’s impractical to hire someone else.

“Social robots are designed to be helpful partners not useful tools,” Breazeal said.

One small example of how Jibo could help out is by allowing users to stay more in the moment with their families instead of having to worry about removing themselves from the interaction to constantly take photos.

Breazeal noted that the world is poised for advances in social robotics because of the mobile computing revolution that proceeds it. Progress to battery technology, speech recognition, vision computing and other fields have made Jibo possible at an affordable price point.

As complaints continue to grow that more and more human interaction is spent staring into our own screens, a device like Jibo pushes back against those tendencies. If he lives up to his promise, Jibo’s helpfulness will make him feel like part of the family, bringing us together instead of separating us.

When I asked how smart Jibo is, Breazeal was careful to note that he’s not designed for us to just be able to say anything we want to him. In her view, Siri suffered from being unable to live up to that kind of high expectation.

“One of the big lessons we’ve learned with AI and robotics is the more you can scope the problem, the more chance you have at delivering a successful experience,” she said.

Jibo will have a specific set of skills that he’ll be smart enough to help you with, but he’s not a catch-all assistant that you can just ramble off commands to. Of course, the developer community can expand what Jibo is capable of doing, but the design philosophy is meant to be in the context of precise skillsets.

I’m very curious to see what kinds of emotional connections families will develop with Jibo when they start to use him. If his emotions are on cue, I can easily imagine kids growing to love the robot much like a pet. However, Breazeal noted that Jibo isn’t meant to replace or compete with your existing relationships. The human-robot relationship will synthesize what we know from our experiences in human relationships while also drawing on new interactions with technology.

“Jibo for the first time is combining this intelligence from AI and robotics with this helpfulness of a partner, along these skills, with this heart, this humanized experience…and bringing it all together into one product.”

I had to ask: Will Jibo rise up one day and kill his masters once we’ve come to rely on him and he gains sentience? Breazeal stressed that her line of robotics is about empowering people, rather than just blindly meeting all of our needs. Even if she could build Rosie from The Jetsons, Breazeal wouldn’t want to because that type of technology just takes over our tasks instead of helping us with them.

“Technology is technology and we need to make sure that it supports our human values and the society we want to be,” she added.