You went to an Ivy League school, you mastered the Socratic method as an infant and solving the Rubix cube in less than 5 minutes is your favorite party trick; in short, you’re brilliant. Allured by the large paychecks and flashy lifestyle of champagne adorned tables in swanky New York clubs, you take your talents to finance. It’s the Great American Brain Drain: Our brightest minds sucked into a world of extreme capitalism.

But a second brain drain has now emerged, the Social Media Brain Drain. The recent procession of Princeton, Yale, and Harvard graduates to Silicon Valley was triggered by the rising cultural idolization of social media entrepreneurs and the boom in angel and seed investing in social media.  The combination of easy money and the glamour of appearing in magazines and on television as an “entrepreneur” has driven some of our best and brightest to dedicate themselves to social start-ups. The result is a loss of soul in technology, a rise in Hollywood culture, and a misallocation of human resources.

Entrepreneurs on a Pedestal 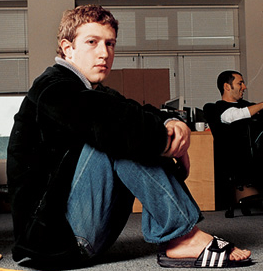 Entrepreneurs are now cultural icons.  From Mark Zuckerberg in The Social Network to Bloomberg’s reality show about TechStars, entrepreneurship is now in vogue.  It’s hard to resist starting a social media start-up when the founders of Foursquare appear in ads for GAP, or when Tumblr’s David Karp is featured in Uniqlo’s catalogue.

Now, as a country that reveres innovation and hard work, we should make Mark Zuckerburg a cultural icon. The problem is that the cultural fruits that accompany successful entrepreneurship are now the central goal of newly minted entrepreneurs, rather than an incidental byproduct of their sweat equity. Just as the beautiful in society seek out fame and fortune in Hollywood, the brightest innovators are now seeking out Silicon Valley. The California gold rush has never been so alluring.

As budding social media entrepreneurs rush into the ecosystem, angels and seed round investors are investing massive amounts. TechCrunch reported a 33% increase in angel/seed investing from 2008 to 2010. Angels are chasing returns as the price of Facebook and other private social media companies’ stock continues to skyrocket. In January 2010, Facebook stock was valued at approximately $14 billion. Two years later, the rumor is a planned $100 billion IPO.

Entrepreneurs can stem the Social Media Brain Drain. Technology should be the industry of innovation, of striving to improve the human condition in ways people only 10 years ago could not imagine. Our best and brightest need to stop viewing social media as a quick avenue to fame and fortune. A rise in entrepreneurship is a good thing, but the underlying cause of wanting cultural significance is a bad thing. These entrepreneurs should look to build significant companies, realizing that their dreams of big exits and magazine interviews will follow after their hard work.

At the same time, angels and institutional investors need to realize that giving $41 million to a photosharing app that does not yet exist is foolish. Investors should be investing to create returns, not to see their name in the press. The idolization of social media entrepreneurs may be a permanent societal shift, but the funding interest doesn’t have to be. Investors can help course-correct by cutting off the supply of irrational funding.

It’s not too late. As a community, we can rally around great entrepreneurs. We can be honest with ourselves that the tide of Harvard graduates invading Silicon Valley comes from both a renewed interest in technology and a new Hollywood culture that weakens the tech community. As we lose our soul to magazine covers and movies, we can begin to reclaim it by putting entrepreneurs of substance on a pedestal—even if that includes a GAP ad appearance.