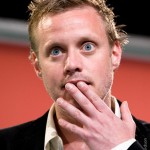 You might be familiar with the founder of Star.me, his name is Ze Frank, and he’s best known for his daily internet show, “The Show w/ Ze Frank”, a year long project that ended in 2007.

Star.me is most definitely not a show, but it could be Frank’s most engaging community project to date.

None of that means anything unless Frank comes up with something really amazing, and I feel like he has.

Star.me has a simple and gorgeous lightweight design. The premise is also simple, set up a “wall” of sorts, and add your friends from Facebook or Twitter. You can leave different themed stars on your friends’ wall and tell them why you left them. Stars like “Thank You” and “Bro Hug” are ways of interacting without chatting or replying to a tweet, or even picking up the phone.

This is very similar to the Facebook poke, which in some circles is a very popular way to just say “hi”.

I had a chance to interview Ze Frank about Star.me’s mission.

The Next Web: What are Star.me’s core features?

Ze Frank: Star.me Mission of the Day gives users a new challenge each day. Multiple times a week we feature guest missions from celebs, brands and super creative star.me users, offering prizes for the most awesome entries. We are focussed on fun and engagement – or as we like to say “Creativity, Curiosity and Kindness”. Now that we live in a social web, we need things to do with each other!

Mini Missions allow you to be creative and have fun with your friends, answer one of the over 1000 star.me questions, draw pics, unlock new activities.

Stars: Remember the stars we used to get in kindergarten? Same thing except with a shot of energy drink. Tell your friends how great they are, play games, share music and vids, collect them for rewards and prizes. Plus we have a double rainbow star. Just sayin.

The Next Web: Why did you start Star.me?

Ze Frank: Star.me is a cross between a social network and a social game that provides a playground for
people to have more fun with their friends.

We are in the midst of a major shift in media industry where social engagement is the new currency and real interactions are replacing
impressions and clicks.

That’s what I have been focused on for years, play and participation, and star.me is a distilled version of that thinking. Plus it’s super fun

Immediately I wondered how many people would be into this type of social interaction, thinking that this could be a very small niche, so I asked Frank to share some numbers, and he did. Star.me boasts 20,000 users and is “growing fast!”, there have been 117,000 mini missions answered, 70,000 stars sent, and 84% of all users have contributed content. That’s engagement.

Star.me just launched a new feature, recommendations, which very uniquely prompts users to recommend things they like to do and use with the same type of fun game mechanics that the rest of the site does well.

When asked what the goal of Star.me is ultimately, Frank responded simply: