In an update to a recent update, the developers of Snapseed, Google’s mobile image editor, circled back to address some complaints about what it left out and also to add a few new things. 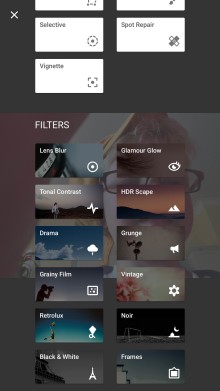 “After releasing Snapseed 2, we’ve heard a lot of excited voices, but also listened to your constructive feedback,”  Sven Tiffe, Google/Nik Software technical program manager wrote in a blog post. “You told us and we heard you, Grunge is back!”

And so it is … at least for some 10 percent of Android users today.

The newest update to version 2 includes the ability to copy, paste and hide Control Points in Selective, better styles in HDR, an option to export flat copies on iOS 8 for compatibility with Lightroom and Dropbox. Add to that the usual stability and performance improvements.

Google started rolling out the Android update today, so be patient if you do not yet see it. Obsessives can find out what version they’re running by checking the app’s “Help and Feedback” section to see if you’re running version 2.0.93990626. If you’re not, you will be soon, likely by tomorrow.

➤ Snapseed: Grunge is back  [iOS and Android]