As an American living in a European country where German is the official language, I can personally attest to the challenges one faces, not only in learning the intricacies of the language itself, but also the day-to-day human interaction-tasks such as ordering a loaf of bread or a cup of coffee at the corner shop.

But what if you could simplify a language down to 100 words, and have them readily available in your pocket? Bratislava, Slovakia based startup Lingibli has recently gone live and is seeking to make learning a foreign language both fun and practical with as little friction as possible.

Lingibli has its roots in a methodology first popularized by noted mental trainer Tony Buzan, and aims to incorporate as many senses as possible when learning a new language. Buzan’s premise states that only 100 words make up 50% of all conversations. Lingibli focuses users on these key phrases, employing both sound and site to drive home the learning.

The language learner also effectively bridges the gap between the app in your pocket and the table in your dining room by offering printable QR code based labels that trigger an audio file within the app. Adding a dash of Buzan, Lingibli also offers the tagged word embedded into a sentence, providing practical, real world usage. The only downside I saw here was that users must use the QR code scanner within Lingibli for the files to trigger. I would like to see the app self launch and provide the file regardless of which specific QR code reader I’m using. 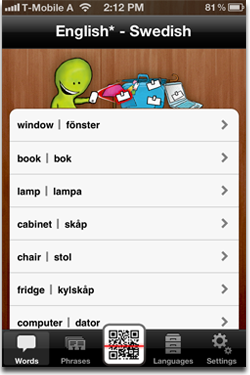 I tested the accuracy of the printouts in German and found them to be pretty good. But as noted above, I’ve already studied German and have a fairly good grasp on how to pronounce most words. So how about Swedish? I applied the same “print it and stick it” philosophy over the weekend, and am now able to point out a Swede’s computer (dator), fridge (kyskåp), and trash can (sopkorg) from memory. And as far as pronunciation goes? I phoned a colleague in Stockholm, and proudly rattled off my newfound vocabulary. She laughed, corrected only one minor pronunciation fault, but found my overall Swedish to be quite impressive. Not bad for two days. She also provided a sentence most probably not found within Lingibli, “Om datorn är Windows, det ska vara i sopkoren.” (Fanboys…have at it, but only in Swedish please).

To be fair, Lingibli is not a full language course, and users shouldn’t expect to master a foreign tongue through the app alone. However, if you’re a road warrior, traveling photog, Phileas Fogg, or simply aren’t content with repeatedly asking, “Do you speak English?” Lingibli is there to get you pointed in the right direction.

Both co-founders of Lingibli found themselves in similar, yet different situations. Milan Schnorrer studied in the Netherlands and says that he wanted to learn Dutch.

“I didn’t want to spend a lot of money on books that I may never open, or courses that I didn’t have time to attend. Sure, I learned how to order beer, and a few colorful expressions, but that’s about it.”

Raffael Kellner wanted to learn Slovak, but ran into a wall when looking for any language books.

“Instead, I found Tony Buzan’s book while researching for other language learning opportunities.” 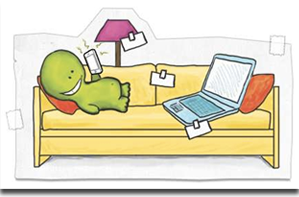 Lingibli certainly isn’t alone in the language learning apps market, but as far as I can tell, it’s the only one out there that offers a practical, see it, say it, repeat it, learn it method. Its innovative use of QR codes and narrowing down a language to its essential 100 words should provide eager foreign language learners all the tools they need to get started.

The app is now available to both iOS and Android owners and is free of charge. Language packs are available for $4.99 each, or if you’re on a global trek, all 18 languages can be had for $24.99.

As an added bonus, Lingibli informs me that its actively looking for native speakers of both Klingon and Elvish, ensuring that those chance encounters aboard the holodeck or middle earth are all the less awkward.