Rent in the San Francisco area is pretty high, but that’s not stopping Kurt Varner from chasing his dreams to build his startup DailyToaster.

Instead of asking friends-of-friends for a place to crash, the Los Angeles native has decided to work out of coworking spaces and sleep in his Honda full-time. Varner discussed the cost-cutting move to fulfill his dreams of Internet stardom on his blog today:

In two days, I will leave my cushy life in Los Angeles to live from my car in Silicon Valley. Yep, that’s right. From my car. It’s going to be one of the most adventurous things I’ve ever done, and will be a challenge to say the least.

Why am I doing it? Trust me, a lot of serious thought went into this decision. The main reason being that the Bay Area is the center of the startup universe, and I know that locating there is best for both my startup and me as an entrepreneur. That being the case, I’m going to do whatever it takes to be in that environment. 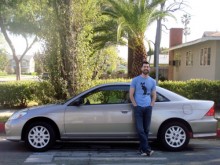 Never oversleep again. DailyToaster is a simple alarm system that guarantees to get you out of bed on time.

I’m intrigued, so I signed up to be notified of its launch in April. The part that’s more interesting to me is that Kurt is going balls to the wall in his effort to make his dream a reality. His wife will be staying behind in Los Angeles, lucky for her, and his Honda will be outfitted with a sleeping bag for sleeping purposes. Not only will he save money on rent, but he says that it will help him obtain better perspective on life at the same time:

Furthermore, a non-obvious benefit of living from my car is gaining a minimalistic perspective on life. Everyday, I take for granted things like a warm bed, shower, and home cooked meals. It’s easy to lose sight of how privileged we are as middle class Americans, but hundreds of millions of people are without these basic things. I’m no adamant philanthropist, but it can’t hurt to better appreciate the little things in life.

While we hear numerous tales of “eating ramen” and shacking up with four or five colleagues when starting a company, this is pretty extreme. You have to give him credit though, and he promises to stick to his guns on staying in the car.

How is he going to shower, you ask? Duh!:

I’m really going to rely on the startup community to help me out here. My plan is to post $1 listings on Zaarly and to ask for showers through Twitter.

There’s nothing odd with tweeting out requests to use people’s showers, is there? I guess nothing is odd when you decide to sleep in your car to support your company and then tell the world about it in a blog post.

Good luck Kurt, I’d be more than happy to help you find a shower. It’s going to get smelly in that car.