Skype for Windows Phone (8/8.1) has a new drawing tool that allows users to send hand-drawn images and other personalized messages to recipients. 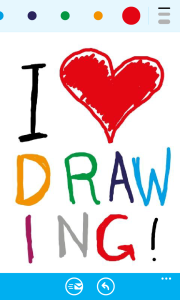 Announced today in a blog post, the drawing feature can be used by tapping the + icon in chat. You can start from scratch or add messages to existing pictures, if you prefer. Skype suggests it could be handy for things like indicating the quickest route on a Bing map, as well as more ‘comedic’ uses.

What’s more interesting than the drawing feature itself, perhaps, is that it’s one of the first mobile Skype options that has been made available for Microsoft’s own Windows Phone platform ahead of rollout on iOS or Android – neither of which have been confirmed to get the feature, although we’d expect to see it make its way across sooner or later.