This article was published on February 9, 2015

If your main form of communication with a friend is via Skype, it’s been frustrating for Android users to send photos while that friend is offline. Well beginning today, you can send as many photos as you like and know that they will receive them when they sign on via the mobile app. 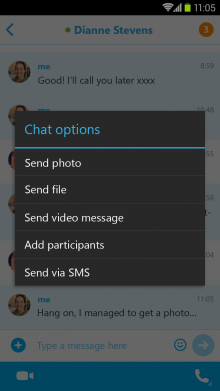 The latest version of Skype for Android not only handles offline photo sharing, but it also features picture in picture view for phones. Now you can leave Skype for other applications and still see the person you’re chatting with. This feature appeared on Android tablets in December 2013.

The company also announced that the iOS version of the app will once again support URI (uniform resource identifiers). That means that developers can create links within their apps that launch the Skype app and make a voice or video call. Of course, you need Skype installed on your iOS device for this to work.

Both updates are available right now.