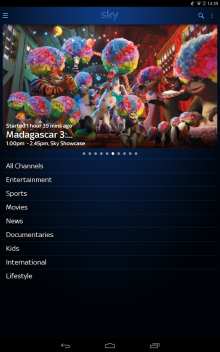 The app joins its Android smartphone and iOS counterparts, which have already been available for some time. The new Sky Go Tablet app is available to download from Google Play for free today, although it requires an existing Sky TV subscription.

The app is compatible with “the majority of Android tablets” above 7-inches, while Android phones should continue to use the other Sky Go app as normal. Notable unsupported devices include the Asus Transformer TF101 and Amazon Kindle Fire range, which is based on a forked version of Android, so doesn’t come as a complete surprise. In future, the two smartphone and tablet apps will be combined into one, Sky said.