Skift has raised a healthy $1.1 million seed round, as the travel intelligence and news startup looks to take on new hires and develop its myriad of tools and services.

The brainchild of PaidContent founder Rafat Ali, Skift officially launched last July offering a mix of news, insight, data and other tools to those with a (vested) interest in the travel industry.

This latest funding round is led by Lerer Ventures, with participation from four new seed funds – Ironfire Angel, MESA+, Advancit Capital, and Growlabs/LX Ventures who are investing together.

So, a varied and mixed bag for this seed round, and this takes Skift’s total funding to $1.5 million. Ali says the latest cash injection will be used to double Skift’s head-count to ten, bringing in two new developers, one sales lead, one social media manager and one reporter. They will be based in a new NYC office, which will open within the next month.

Rafat Ali launched PaidContent back in 2002, a Web-based publication that focuses on the burgeoning digital media industry. Ali sold PaidContent to The Guardian Media Group in 2008 (which later sold it to GigaOM). Ali then co-founded Skift with former Frommer’s Online Editor Jason Clampet last summer, the first phase kicking off as a news, information and data portal for travel brands. 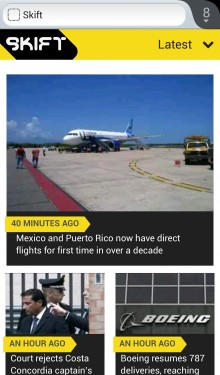 Part of the problem, as Ali saw it, was that the travel industry was being served by pre-Web legacy media brands that don’t even have mobile on their roadmap. Meanwhile, other sectors such as media, technology and finance are used to “digital native, 24/7, breaking news, analysis and opinion, with social hooks,” as Ali put it.

Skift wants to be the homepage for the travel industry, serving up an all-encompassing data-fueled news service.

Back in January, Skift declared it was aiming to build a Bloomberg-like data dashboard for the travel industry. Part of this plan constitutes SkiftSocial, a social media dashboard for travel brands – this includes airlines, hotels, resorts, startups and more. The tool includes rankings, comparisons and other metrics, covering Twitter, Facebook, Instagram, Klout and YouTube.

Want to know how Heathrow Airport uses Twitter? SkiftSocial can tell you.

Skift: The lingo of the travel industry?

Although Skift is proving to be a good resource for anyone with an interest in travel, the startup is focusing on brands for revenue and Ali says that users are “more likely” to be executives and managers from the likes of Expedia, JetBlue, Starwood, Kayak, Qatar Airways, Lonely Planet, Conde Nast, American Express and so on.

Skift also has syndication deals in place with the likes of CNNTravel, NBCNews, LinkedIn and AdAge, meaning a selection of its news stories are re-published on their sites, though given the increasingly data-centric direction Skift is heading in, it’s safe to assume it will be looking to syndicate its data too.

This month, the company is forecasting more than half-a-million unique visitors to Skift.com, with 25% of its traffic stemming from its mobile portal. And as Skift approaches a year in business, Ali says that Skift is well on its way to becoming “the lingo of the travel industry.”