This article was published on December 9, 2008 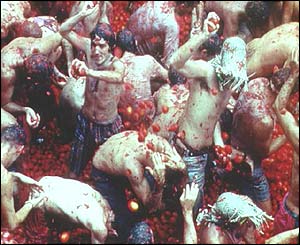 We just had lunch and it was horrid. Thousands of little delicious French high cuisine snacks spread on long tables guarded by the gnarliest security guys Paris had to offer. Hundreds of people stormed these tables to get their hands on the delicious, but tiny, little works of food-art. I recognized a small fish in one of them but most of the ‘pieces’ were tasty but undefinable bits of food.

Most people seemed to have missed breakfast (us included) and were desperate for something, anything, to eat. Unfortunately the guards had strict orders not to release any food to anyone, no matter what and by all means necessary. Armed with small fire arms I personally witnessed three Finish entrepreneur getting shot down while trying to steal a small loaf of bread 1.4 minutes before the buffet officially opened. Then, when they opened the gates and the guards stepped aside all hell broke loose. People were ripping out each others hair trying to get to the tables. Clothing got torn, nails were broken. There was blood everywhere. (See the photo that Ernst-Jan managed to take. I’m on the right with my shirt tucked over my head)

The long-winded last speaker, combined with no breakfast, limited Wi-Fi and the extreme cold had beaten all the humanity out of the attendees. Luckily I was able to pry some food out of the hands of a petite French women. She wouldn’t let go at first so I had to kick her a few times. I feel much better now.

Tomorrow we are bringing our own food. And baseball bats.