For those of us old enough to remember television in the ‘70s the epitome of cool was the Six Million Dollar Man, Col. Steve Austin and his bionic enhancements.  But what was once the purview of science fiction is inching closer to becoming an everyday reality, as optics specialist Eric Tremblay unveiled a unique contact lens that provides the user with telescopic vision.The lens was revealed in 2015 at the annual meeting of the annual meeting of the American Association for the Advancement of Science (AAAS) in San Jose, California.

The new contact lens, a more advanced model of a prototype introduced in 2013, is 1.55 millimeters thick and features a very thin, reflective telescope, which allows the user to zoom in and out in literally a wink. The telescopic contacts are made with a rigid lens known as a scleral lens— larger in diameter than the more familiar soft contacts, but useful for special cases, such as for people with irregularly shaped corneas. Despite their size and stiffness, scleral lenses are safe and comfortable for special applications, and are an attractive platform for technologies such as optics, sensors, and electronics.

So how does it all work? According to the research team, which in addition to Tremblay (of the Swiss Ecole Polytechnique Federale de Lausanne) includes developers from the University of California San Diego, Paragon Vision Sciences, Innovega, Pacific Sciences and Engineering and Rockwell Collins, “Small mirrors within bounce light around, expanding the perceived size of objects – magnifying the view, so it’s like looking through low magnification binoculars.” 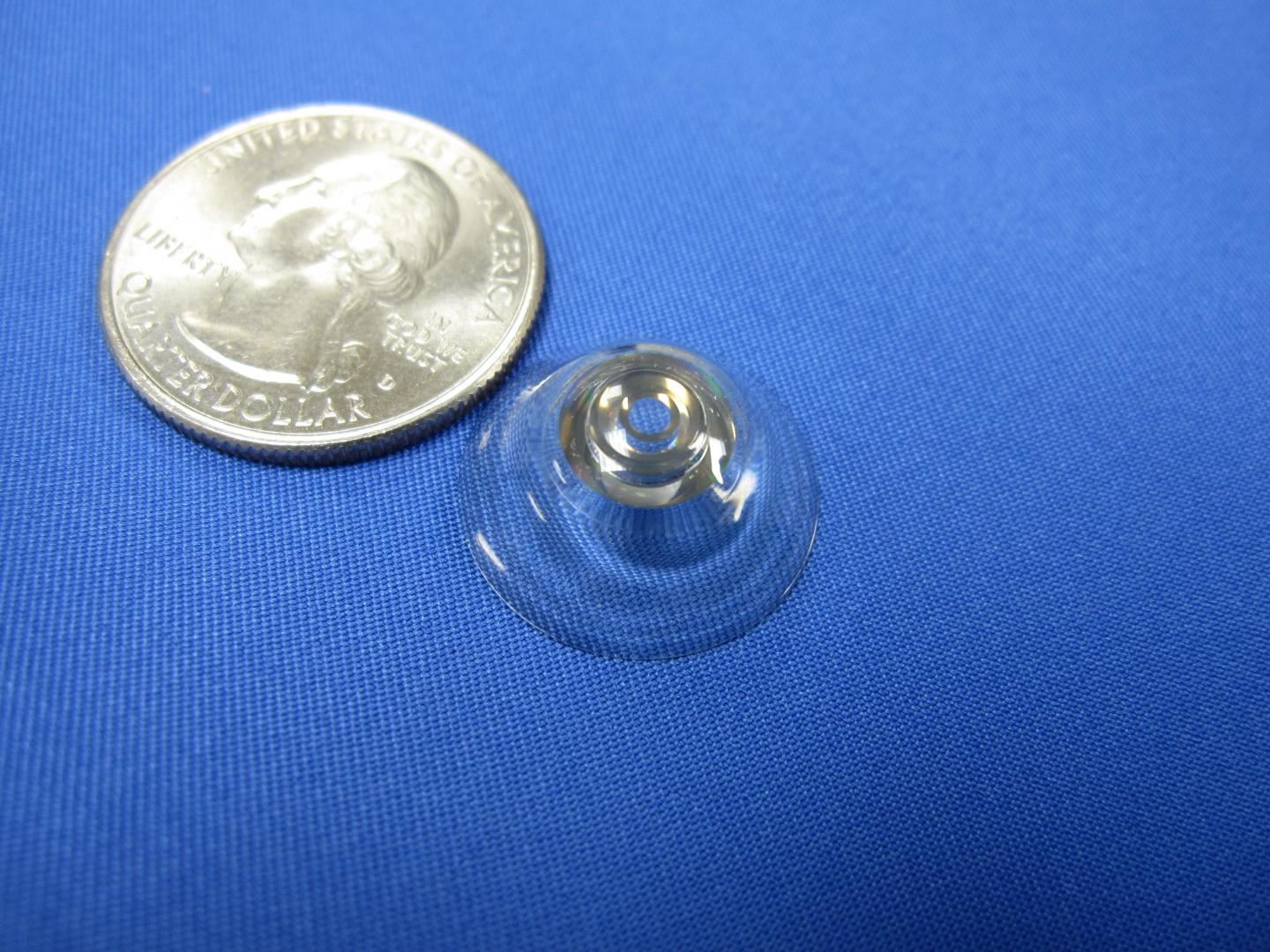 The latest version of the telescopic contact lens, compared to a quarter (for scale). (Image Credit: Eric Tremblay and Joe Ford / EPFL)

Other vital improvements include giving the lens more oxygen permeability by putting in minuscule air channels approximately 0.1 mm wide to allow oxygen to flow around and underneath the lens. Also developed in tandem with the lens are ‘smart’ glasses that will respond to the wearer’s winks (but not blinks), allowing the wearer to switch almost effortlessly back and forth between magnified vision and regular vision; sort of a Clapper for your super vision…’wink on, wink off’.

Besides its potential military applications (the project was originally funded by the US government research agency DARPA), this new technology holds enormous potential for the roughly 285 million people worldwide who are visually impaired due to age-related macular degeneration (AMD). AMD is one of the leading causes of blindness among older adults.  While there are currently glasses for people with AMD, they tend to look awkward and cumbersome, because of their mounted telescopes, and can interfere with social interaction. What’s more is that they don’t track eye movement so they require continual positioning of the eyes and tilting of the head to use them. A contact lens with such capabilities would allow for easier reading as well as better recognition of faces and objects. Think of it as the greatest improvement for bifocals in 230 years.

“We think these lenses hold a lot of promise for low vision and age-related macular degeneration. At this point this is still research, but we are hopeful it will eventually become a real option for people with AMD,” Tremblay said. “It’s very important and hard to strike a balance between function and the social costs of wearing any kind of bulky visual device. There is a strong need for something more integrated and a contact lens is an attractive direction.”

Tremblay also indicated that there are still some kinks that have to get worked out before the lenses are ready for the general market.  However, when they do become available they could help millions of older adults to see: their family, their friends, and their grandchildren. And that is certainly worth a lot more than six million dollars.

Read next: Here’s how to DIY muscle-activated bionic claws that let you flex like Wolverine