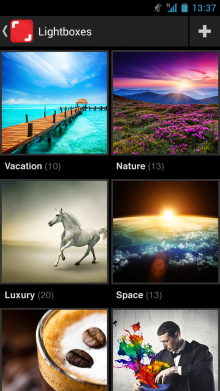 Stock media marketplace Shutterstock has launched its first Android app today. At the LeWeb conference in Paris today, a company representative told us that last month Android devices made up almost half of the mobile traffic to Shutterstock.com, so the new app is clearly fulfilling a need.

The app allows users to browse the Shutterstock image library and add images they’re interested in to ‘lightboxes’ for later download from a desktop browser. The iOS version of the app, which the company says has been downloaded around 650,000 times, launched without the ability to download images but it was added later. The Android version will follow this pattern with an update to allow on-device downloads added in due course.