Shakespeare’s London, a new app for the iPhone, utilizes satellite positioning to pinpoint buried memories concerning the “Bard of Avon.”

Hits: Wonderful design.  Shakespeare’s London is an app that entertains and teaches regardless of one’s physical location.

Misses: To borrow a line from the Bard’s The Two Gentlemen of Verona, “Love will not be spurred to what it loathes,” (5.2) and I loathe the price.  At $2.99/£1.79, Shakespeare’s London is too expensive for my taste.

William Shakespeare.  A literary figure who fascinates not only yours truly but countless others.

Shakespeare’s surviving works consist of about 38 plays,  154 sonnets, two long narrative poems and more.  One of the more interesting facts about Shakespeare is the notion that he may have created, not used, created, upwards of 1700 words.  According to Warren King, “In all of his work – the plays, the sonnets and the narrative poems – Shakespeare uses 17,677 words: Of those, 1,700 were first used by Shakespeare.”

Regardless of the exact number, Shakespeare had an enormous vocabulary for Elizabethan times, when the average vocabulary was said to be about 500 words.

Since first encountering the work of Shakespeare as a youth I have read and studied all things Shakespeare.  To wit, Macbeth, my favorite Shakespearean work, is also the name of one of my pets.  To say I enjoy Shakespeare is an understatement.

Shakespeare’s London, a new app from Data Ninjitsu, Victor Keegan and Keef Moon, speaks to both my love of Shakespeare and great iPhone apps.

The app itself is simple to use, extremely well-designed, and a pure delight.

After launching the app one is provided with an introduction to the app’s basics, in addition to allowing one the opportunity to choose from a variety of map options, including showing your present location and that of important Shakespearean spots. 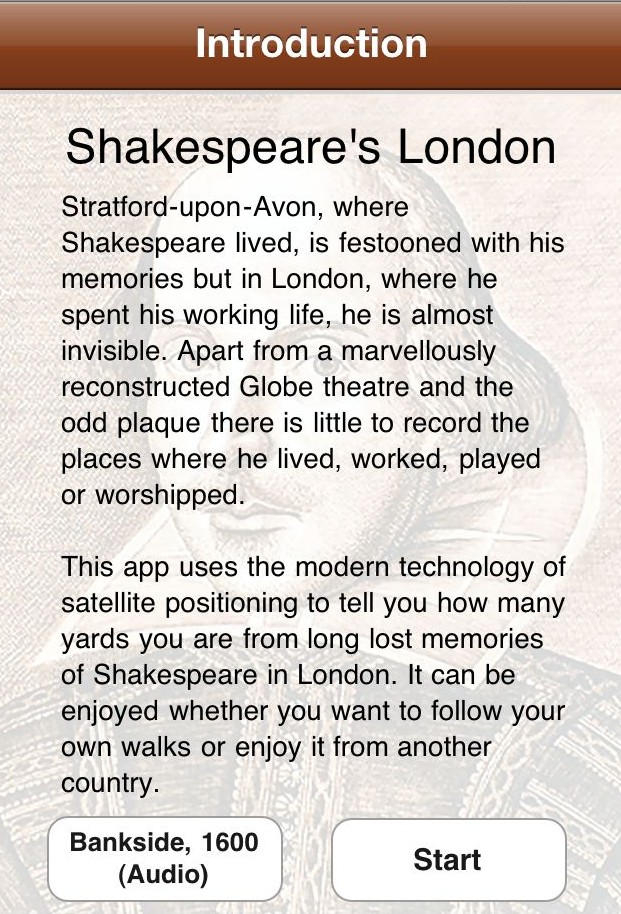 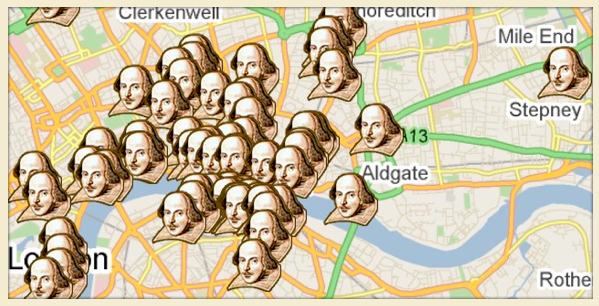 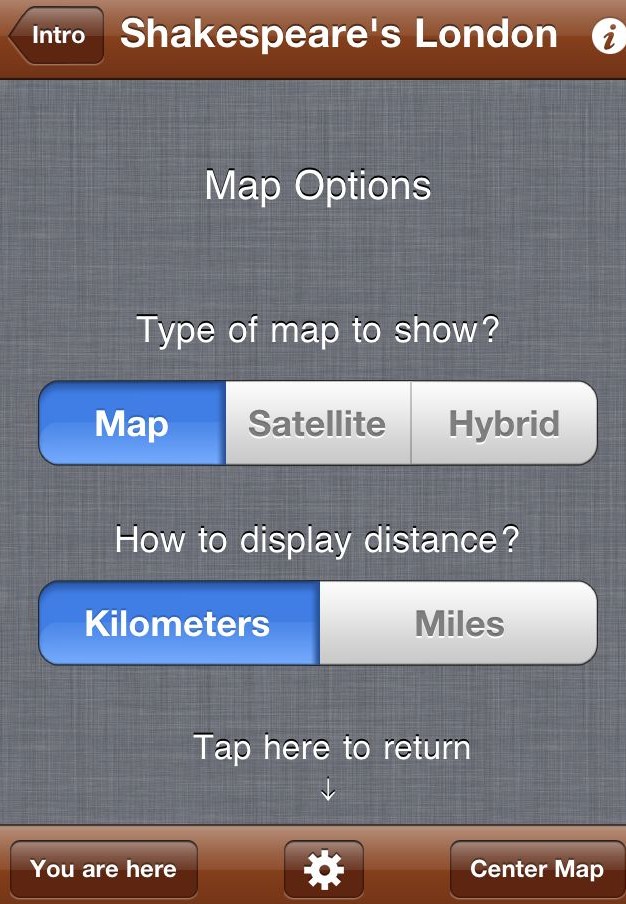 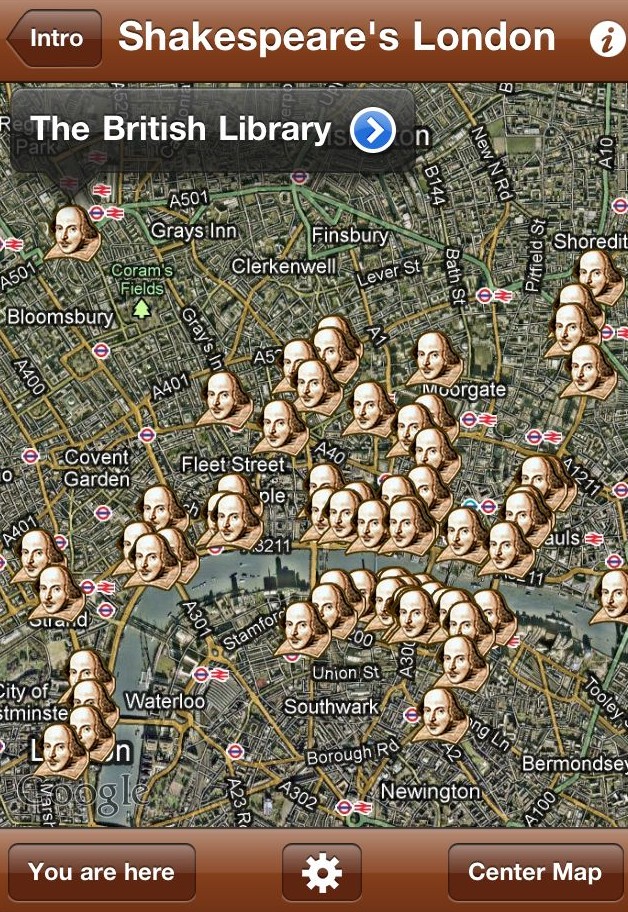 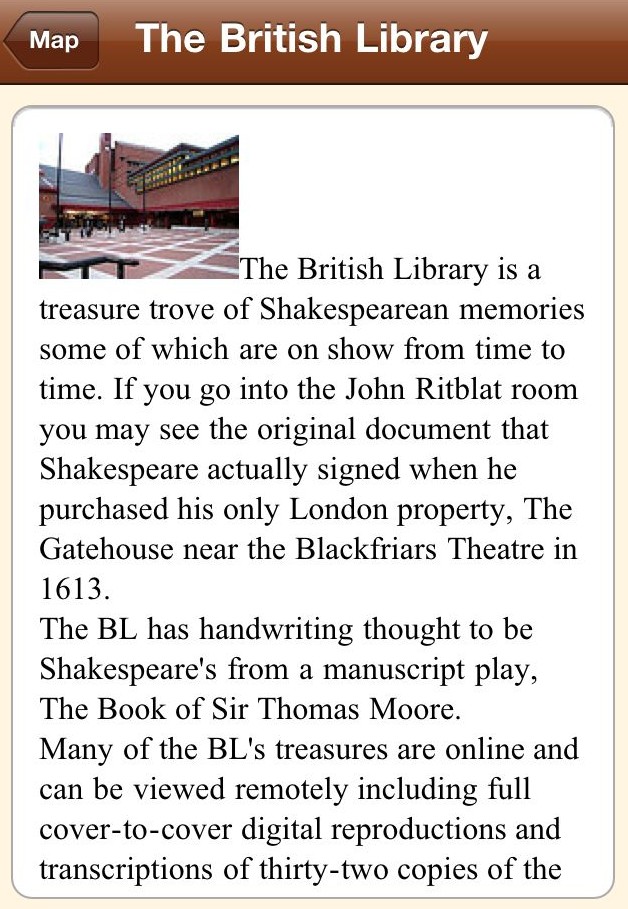 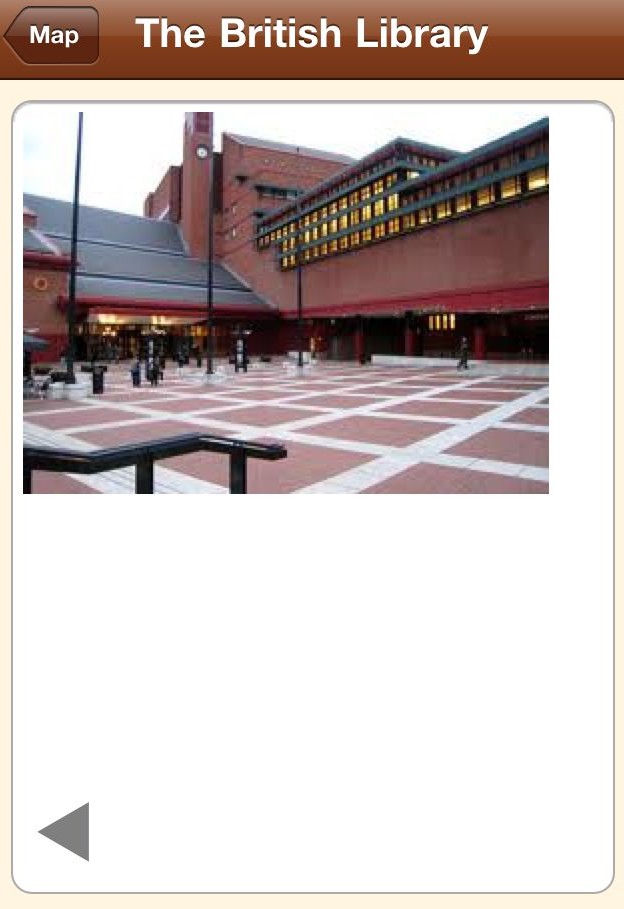 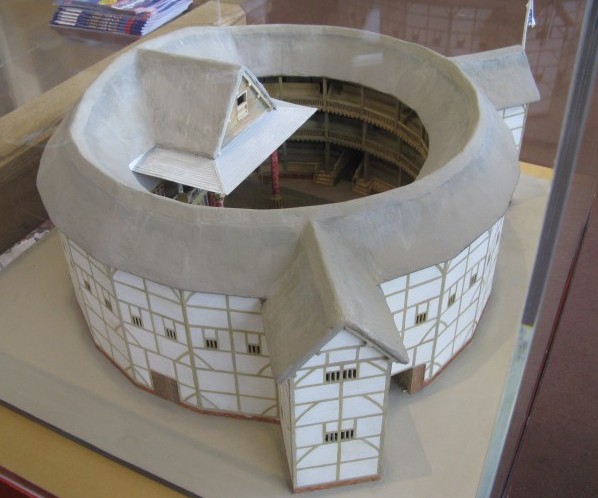 Once you’ve chosen your preferences it’s time to begin exploring.

Shakespeare’s London map displays miniature heads of Shakespeare.  A simple tap of one of the heads reveals the name of the point of interest and the distance one is from the chosen site.  Tapping the point of interest a second time reveals a page with additional information about the site, and yet a third tap, this time on the image within the page, enlarges the image itself.

It would be remiss of me if I didn’t discuss what I don’t like about the app.  The price.  $2.99 is simply too much for this app.  As much as I love Shakespeare, there is no way I would pay such a price for this app.  I understand the time, research and more that went in to the creation of this app, that said the app’s price is too high.

Price aside, Shakespeare’s London is a grand app.  Regardless of location, one can explore Shakespeare’s world, learning a great deal in the most enjoyable of ways, anytime, anywhere.