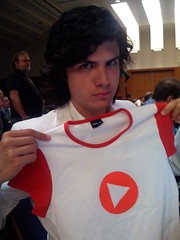 Germany-based Sevenload, announced at Supernova today that they secured ‘a double digit million euro’ investment from T-Venture which is a part of Deutsche Telekom.

First of all, what is Sevenload, you might think. I’m sure a lot of people have heard of the name, but when asked what the company does, it becomes more difficult. The official statement: “Sevenload is a social media platform for video, photos and interactive show formats”. In my own words, take Flickr, Youtube, Vimeo and Blip.tv, combine them into one company and you have Sevenload. Sevenload is especially well known in Germany, but with this round of funding, they’ll try to conquer the rest of the world. Starting as a sponsor of Supernova 2008, I guess this will be their first effort to enter the American market.

Sevenload also announced that they joined the “User Generated Content Principles” initiative, to protect copyright claims of content owners. This initiative is backed by big US companies like Disney, Microsoft, Fox, CBS and MySpace.

Oh, by the way, that is Ernst-Jan with a Sevenload shirt, a present for my girlfriend.