Startup incubators are all the rage these days, but few can hold a candle to Europe’s Seedcamp, an early-stage micro seed investment program that we’ve written about quite a few times at The Next Web.

Seedcamp first popped up on my radar last July, when it announced 4 winning teams from its Mini Seedcamp New York trip. This year, 20 entrepreneurs from Seedcamp, led by Reshma Sohoni, Carlos Eduardo Espinal, Kirsten Campbell and Philipp Moehring are embarking on their 4th annual U.S. tour, which begins in New York City and culminates in Austin at SXSW.

“There’s really no better time of the year for a startup tour of North America,” Philipp Moehring, Seedcamp’s Associate told me yesterday at a Seedcamp mentoring event at Google’s Chelsea Market offices.

This year, Seedcamp is touring with a record number of 19 teams with plans to meet investors (including Andreesen Horowitz, AOL Ventures, Greylock Partners, Highland Capital Partners), connect with partners (including Google, eBay/PayPal), discover local ecosystems, meet “the big boys” from companies like Twitter, Foursquare, Facebook, Tumblr and Etsy and and generally just have a good time. 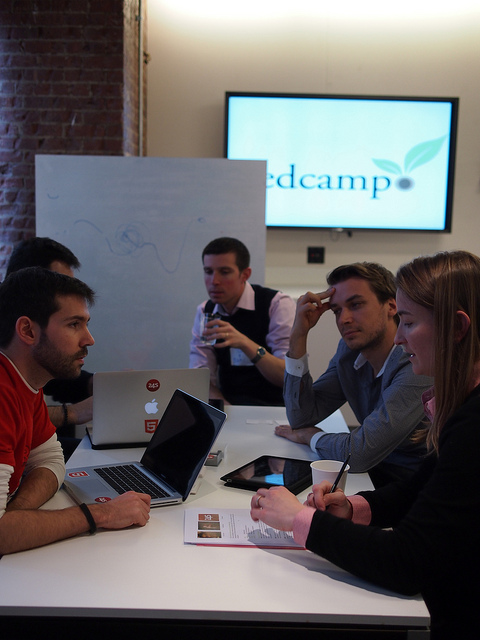 “We have learned in the past years that the connections to the US do not simply come from emailing and Skype calls, but much more so from spending time in the right places with the right people. Some of the earlier Seedcamp alumni like ERPLY, Zemanta, Rentmineonline, Vox.io, and Farmeron have already shown what the jump to the US makes possible,” writes Seedcamp’s Reshma Sohoni.

A number of noteworthy teams took the stage to provide the room with quick snapshots of their startups. The Spanish startup 24 Symbols was the first to present its one-click, cloud based reading service. “Please switch off your TV and read with us,” they said.

AppExtras was up next with its cross-promotion marketplace for mobile app publishers. The startup that aids in app discovery is already driving 10% of Merriam Webster’s paid app downloads. Next, two entrepreneurs from Paris, France spoke about their startup Archivme, which is “Tripit for invoices”, and how they plan to tackle the invoice billing system from a very different angle than what’s been seen before. 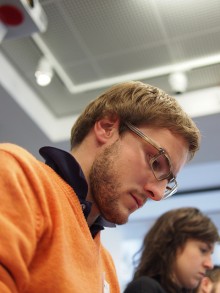 One Austrian based startup, Blossom.io was very impressive in describing its lean product development tool. But by far, the one startup that captured my attention was Teleportd, billed as the “Getty for the Instagram generation”, Teleportd is a platform for realtime social photo licensing. Founder Gabriel Hubert (pictured right) hails from Paris, France.

The Brussels-based startup CheckThis showed us its platform to make posters in the cloud (think flyers + Tumblr + a dash of OnePager) and shouted out to one of its advisors, our very own Robin Wauters.

And finally the social media management suite Campalyst presented, along with Canadian based Compilr, Helnsinki’s Holvi (which essentially built itself into a bank in 10 months), Boston’s Zingl, Estonia’s Pult and Qminder and the cleverly named geo-location gaming platform Oust.me.

Next up on the tour is Boston, followed by San Francisco and the Bay Area, Seattle, San Diego and Los Angeles, followed by Austin at SXSW until March 13th. Keep up with all of Seedcamp’s news on their new beautiful Tumblr page and on Twitter.