Viggle now has over a quarter million users, the US loyalty program for TV announced today, only a couple months after its launch. 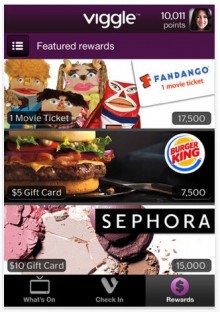 If you’re wondering what Viggle does, think of your average second-screen app, and add rewards into the mix. In practical terms, it means that Viggle’s American users get gift cards, movie tickets and other freebies, in exchange for checking into TV shows they’re watching via Viggle’s free iOS app.

As you can imagine, the formula has proven quite popular, giving Viggle an edge over other second-screen apps. According to Function(x), the company behind Viggle, it has registered over 7 million check-ins to date. In return, Viggle members have redeemed 123,000 rewards, with gift cards from Best Buy, iTunes, Amazon and Starbucks and Hollywood Movie Money proving to be the most popular.

There’s no doubt that Viggle’s consumer proposition can appeal to deal hunters. As one commenter says in the App Store, where ratings are overwhelmingly positive: “I get paid to do something I already do!”

This is obviously naive, and misses the point of Viggle’s business model. As you may have guessed, the company is actually selling audience engagement to advertisers – and it seems quite good at it, if its president, Chris Stephenson, is to be believed:

“Viggle has exceeded all of our expectations. Time spent in the app has grown from 54 to 89 minutes in one month and the level of advertiser engagement is truly extraordinary.”

Viggle offers several incentives for users to spend time playing with its app; besides the ability to automatically recognize what’s on TV, it also features TV-related games, videos and interactive ads, not to mention the social media chatter.

During big events, such as the Super Bowl and the Oscars, it also partners with brands to promote ViggleLIVE, which lets viewers to participate in real-time polls, quizzes and trivia tied to the live shows they’re watching.

Finally, it seems that the app is going beyond building on existing viewing habits:

“We are seeing very clear correlation between how we promote shows in the app and volume of related check-ins. At scale, Viggle should become a true driver of viewing behavior,” said Stephenson.