Who owns the photos that you shoot and share as a family or circle of friends? Oskar Hjertonsson, CEO and co-founder of Seahorse, thinks that they should be mutually co-owned by all participants and interested parties rather than simply being shared by an individual. Seahorse, a new photo app released today after a public beta, aims to facilitate that vision.

Seahorse, which is free for iOS and Android, focuses on what it calls the co-ownership of scenes -- scenes being collections of photos and videos contributed by participants in a group activity or event.

Co-ownership differs from traditional photo sharing in that it gathers together discrete sets of photos and videos from assorted interested parties to share privately among themselves rather than pushing photographs and videos out to individuals, groups or social networks.

"We’re not trying to build a social network, but to promote family sharing when you are part of the event because sharing is fundamental to the experience," Hjertonsson told TNW. "Seahorse creates scenes, not albums so it removes the burden of carrying photos around and also avoids terms of service issues."

Seahorse gives participants a way to share a group experience with the people who were there to help document an event as well as those connected but not present, such as friends or relatives. All photos in a scene belong to everyone invited to join and collaborating on it, bringing all participant perspectives together in one place.

"The app is mobile friendly and mobile first. We're not trying to get people to organize their photos but to organize photos in the best way. It doesn’t matter who creates the scene," Hjertonsson said. Seahorse's co-album structure emphasizes people and participants, rather than who shot which photo. 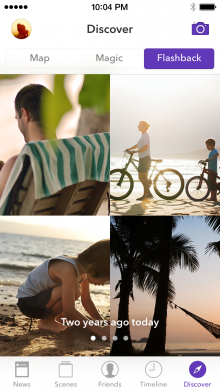 Everyone invited to collaborate can add photos and videos, likes and comments, and are notified about new additions to the scene.

What if you want to leave a scene later? You can withdraw participation in a group completely within seven days of joining, and when departing, you can take a copy of that scene with you.

After seven days, you can still leave, but whatever you contributed to the photo collaboration stays in the scene for the benefit of other participants. In both cases, you will stop getting any further communication, comments, updates or notifications pertaining to a scene you left.

Similar to some other photo sharing apps, Seahorse also offers a variety of ways to view and rediscover older images. For example, you can find photos in a timeline, use a map to search photos and videos according to shoot location, pull up random images from the past with a shake of your iPhone, and get reminders of what you were doing on a specific day in past years. 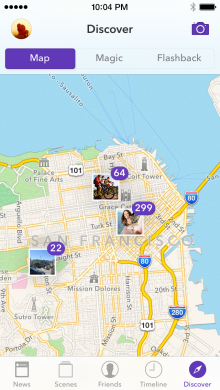 I found the import process to be easy, seamless and quick, even when uploading higher resolution images from the desktop. That's a good thing, since Seahorse shares photos in their original resolution.

You can, of course, organize and sort photos by date, location, friends and scenes. A complete timeline of photos and videos lets you sort by friends, years and places, or track and search for specific people.

Seahorse is not for everyone. If you do not typically get together in groups with different people documenting the proceedings, or are satisfied with the presentation afforded by tools like Flickr, Facebook, and Dropbox, it's likely that your existing photo sharing tools will work just fine.

However, if you typically have a large number of folks who get together and document outings and occasions, Seahorse is a good way for everyone to eye the event from every angle with total access and ownership guaranteed.

Seahorse requires iOS 7 (optimized for the iPhone 5) or Android 4.0 and higher.

➤ Seahorse for iOS or Android