The darknet, cyberspace’s filthy flea-market for forbidden goods, isn’t the global drug network it’s been made out to be. According to Oxford’s new darknet drug map it’s more like your local pusher’s Etsy page than Amazon’s marketplace.

The researchers used darknet web crawlers to scrape the marketplaces of several top underground markets including Alphabay, Hansa, Traderoute, and Valhalla. Data gleaned from the search was then organized geographically to provide insights into what effect darknet markets have on the global illicit drug-trade.

According to their white paper, the team tracked and classified data pertaining to nearly 1.5 million trades occurring on popular darknet markets from June to July 2017. The data was restricted to sales of cocaine, cannabis, and opiates – and limited to purchases with online reviews.

It seems a bit strange to conduct scientific research based on anonymous user reviews for illegal goods, but there’s no other form of empirical information out there. And people tend to take reviews seriously on the darknet, thanks to a perception of anonymity.

By indexing certain identifiers found in the data, the team formed a clear and concise view of where drugs were being produced (grown, in this case), where trades were occurring (geographically) on the darknet, and where they were being shipped. 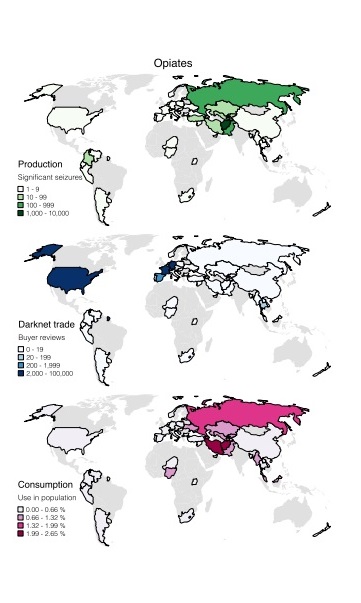 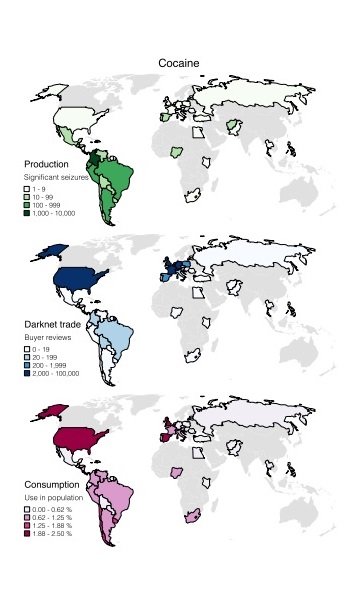 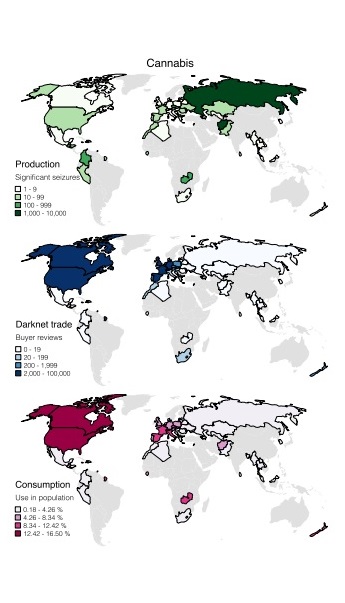 For example, the information clearly shows that none of the three drugs are commonly shipped from production areas to customers in a different region through darknet markets. How drugs are getting from one continent to another, it appears, remains unchanged since the emergence of the darknet marketplace.

Possible exceptions include the opiate trade, which researchers weren’t able to obtain conclusive information on. The scientists, in their research, state:

While this present study sought to identify basic factors that can explain trading volumes based on the known geography of the overall supply chain, the proposed model is too simple to explain the trading geography of opiates, and possibly other drug categories.

The research indicates customers living in the US, UK, Germany, Holland, and Australia are considered the “top five” purchasers drugs on the darknet. But there is no identifiable measure by which to suggest the drug manufacturing or shipping economies have been impacted by these purchases.

In the paper’s conclusion the researchers state:

We cannot find evidence for significant production-side offerings across any of the drug types or marketplaces. Instead, we present strong evidence that cannabis and cocaine vendors are primarily located in a small number of highly active consumer countries, suggesting that darknet markets primarily inhabit the role of local retailers serving the ‘last mile’ for certain regions.

The research, of course, doesn’t make a reasonable person dismiss the inherit evil that lurks on the pages of the darknet. This merely indicates it hasn’t become a driving economic factor in the $321 billion global illicit drug trade.

Apparently cartels are unswayed by the influence of drug-seeking cryptonerds, so far.