Mobile-first dating app Let’s Date has unveiled a new feature designed to help match users with others in the hope of finding something compatible. Calling it the Wingman feature, this Science-backed company allows men and women, who are not actively looking to date, the ability to scour through the service’s dating pool and share the dater cards of interesting people with their single friends. This feature is available on its iOS app today.

This update comes a month after the company, founded by Sean Suhl, Steve Simitzis, and Courtney Riot, of the alternative community Suicide Girls, released its app into the United States. Today, it has shared that nearly 90 percent of its users remain active in the app, 30 days after downloading it. Its users send 130,000 messages to each other everyday and there are 1 million “Let’s Date” or “No Thanks” actions taking place within the service. 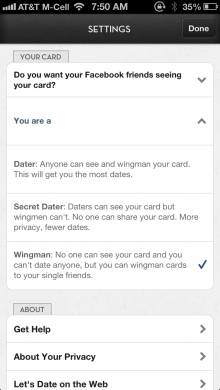 With the Wingman feature, users can designate themselves as the proverbial “wingman” and can then browse freely through Let’s Date’s dating pool. If they find someone who might be a good match for their single friends, the dater card can be shared through email, SMS, or Twitter.

The company says that daters will never see the Wingman’s cards and the Wingman cannot message anyone in the app or go on dates. However, what they can do is take credit for any matchmaking, which eventually will result in badges and rewards — a program the company says will be rolling out next week.

Let’s Date calls itself the “Instagram of dating”. It uses Facebook Connect to authenticate users to allow them to find potential daters. If there isn’t a match, users can draw lines through parts of the card that doesn’t appeal to them, which the app will take into consideration for future match ups.

It’s important to note that only those that are 17 years and older are allowed to download this app.

Also, deploying a Wingman isn’t unique to Let’s Date — there are other services that promote this feature, including the aptly-named Wingman app that links to a user’s Foursquare account. While that particular service is dependent on physical location, Let’s Date appears to be more akin to services like Tinder, eHarmony, Match.com, and others, whereby users watch from afar and then communicate with interesting people later.