This article was published on August 7, 2014

Using your phone to check in to a domestic flights is old hat. But when you’re embarking on international travel, you typically have to stop by the airline counter and show the agent your passport like it’s 1987. 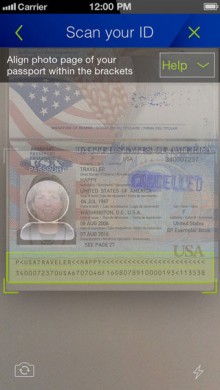 To speed up your check in experience at the airport, United Airlines has updated its mobile apps for iOS, Android with a passport scanning feature. The feature can scan and verify your passport so you don’t even have to talk to a ticket agent.

Like a domestic flight, you can check into your international flight with the app within 24 hours of its departure. Your passport is verified by Jumio, a credentials management company that uses “proprietary computer vision technology” to determine if an ID is real or fake.

But, if you’re traveling to a country that requires a visa and other travel documents, you’ll still have to head to the ticket counter.

United is calling this new feature a test:

United will collect feedback during the testing phase of passport scanning functionality with the goal of further improving the product and launching additional customer-friendly features utilizing this technology.

So if it doesn’t work correctly, the airline can say they’re just testing the feature and point you to the next available ticket agent.