A research study published today by digital publisher SAY Media has found that more people are using their mobile phones to purchase goods than ever before.

According to the report, six out of ten people who own a mobile device use it to research products, while an additional 44 percent use it to purchase goods. If you consider only users aged 18 to 24 however, this number rises to 64 percent and 58 percent respectively.

“From research to online and offline transactions, mobile devices are changing the way consumers interact with products and brands throughout the purchase process,” the report reads. 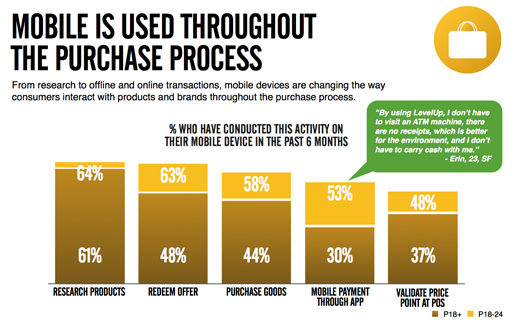 In addition, the research found that 48 percent of respondents use a mobile device, such as a smartphone or tablet, to redeem an offer on a product, while 30 percent carry out mobile payments through an app.

“Mobile devices now play a strong role at every stage of the purchase process. Brands need mobile-optimized sites to aid at every stage in the purchae process [while] location-based campaigns should be leveraged to build awareness, support promotional opportunities and increase consideration,” the report suggests.

It’s safe to say the team at SAY Media did a fair amount of research in order to draw these conclusions. The methods included, among others:

Pretty extensive, wouldn’t you agree? Through the analysis of its own mobile campaigns, SAY Media also found that mobile devices are more like to engage consumers in the “marketing funnel” created by manufacturers, advertisers and marketers.

The findings showed that the average click to site (CTS) figure was three to five times higher on mobile than it was on a more traditional online campaign accessed through a PC. SAY Media suggests that native functionality on mobile devices also “enhances curiosity” from consumers; campaigns which included an element of product exploration, such as a virtual carousel or lookbooks, also had a CTS which was three times higher.

Video was also found to be a significant motivator for keeping consumers interested. It found that in relation to automotive and technology campaigns, users spent 28 and 32 percent more time respectively in each campaign if a video was included.

SAY Media states that marketers now, more than ever, need to get to grips with the growth in web usage by people with mobile devices.

“More than 50 percent of U.S. adults own smartphones and nearly 30 percent own tablets,” the report reads. “Now is mobile’s time.”

In short (as if it needed saying again), mobile is the future. As the company suggests:

“Mobile media is ubiquitious today, yet nobody knows exactly how it will evolve in the coming years. Consumers look forward to using their mobile wallet and marketers are experimenting with NFC and location-based approaches. However, there is still the opportunity for the next big mobile disruptor to emerge.”