I’m part of the Sonic the Hedgehog generation. I grew up spending a lot of rainy afternoons playing games on a Sega console with my older brother, who only allowed me to play Sonic’s little sidekick Tails the Fox and of course beat me every single time. I also spent hours on end reading through my vast book collection, but it’s fair to say that I’m part of the first generation that video games influenced just as much as literature.

Now in 2012 and looking back over the past three decades of gaming, there is no doubt that video games have established themselves as part of our cultural heritage. One form of proof is that museums have started to present video games as such: an artform, a part of our culture, something we have to preserve.

But preserving is in this case a challenging task. It is in fact, illegal.

The Computerspielemuseum (Museum of Video Games) in Berlin hosts one of the largest collections of artefacts about the history of gaming worldwide. 30,000 video games and over 300 consoles have been collected since the museum opened its doors in 1997, the first of its kind. Since then the museum’s curator Andreas Lange has had to watch the collection slowly degrade to worthlessness.

Unlike preserving a canvas, a sculpture or a book, keeping software alive means dealing with a much more ephemeral medium. Magnetic drives fail quickly, and the data carriers that hold the information we’d like to preserve begin to demagnetize about ten years into their existence. Once they’re demagnetized, the data is gone and lost. It’s a tricky business that institutions like the Computerspielemuseum have to deal with. A book may be attacked by mould over time that leaves a few pages illegible, but most of its content will remain. In the digital world, only a few bits lost through demagnetization could render the source wholly uninterpretable.

He has the tools to save the valuable software, but use them he may not, that’s the dilemma Andreas Lange finds himself in. The keyword here is ’emulator’. An emulator is a tool that allows game software to be executed on a platform for which the software was not originally intended. For example, video game emulators allow a personal computer to function almost identically to a video game console or an arcade game system. The gamer community has developed a wide range of sophisticated emulators over the years, some of which can be used to save and preserve software from failing drives. 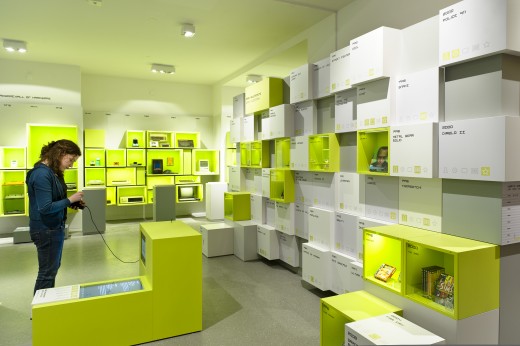 A part of the 30,000 games strong collection at the Computerspielemuseum in Berlin

“If we want to make sure that games we play today are still accessible 50 years from now, we must get away from the original hardware – because it will break,” Andreas told The Next Web. “We do that by digitalising this hardware, which is reconstructed as software and that’s how we can make, say, a Commoder 64 run here on my Windows 7 PC.”

Emulators exist for almost every historic gaming platform. None of them were developed for industrial reasons, but only out of a passion for gaming. Plenty of time and skills has poured into the development of each emulator by developers in the gaming community and currently these tools present the only strategy available for the preservation of video games.

But here’s the kicker: using an emulator also means breaking the law.

“The problem is that the legal situation in Europe does not allow us to save our collection from decay. That’s because of copyright laws that have been added to games a long time ago to prevent pirate copies. After all, emulation is a copy process: we need to transfer code from the original data carrier to another. Copyright laws are in place to prevent exactly that,” Andreas explains. “So, we essentially have to stand there watching day after day as our collection, one of the most significant collections [of video game culture] worldwide, demagnetizes.”

Video games fall into two categories of copyright law in Europe: the audiovisual category reserved for film and music, since games are an entertainment medium, but also the section for code, databases and software. Since games are hovering in a grey area between the two categories, jurists are inclined to apply the strictest regulations from both. Not even public institutions like museums are allowed exceptions – a fact that has not changed in the fifteen years the Computerspielemuseum has presented its collection for.

One would assume that the owners of an intellectual property would like to see it preserved and remembered for longer than predetermined by a magnetic drive. The problem is not solved that easily, though. Nintendo addresses the question of emulators on its corporate information page quite clearly. In a response to the question of “What’s the problem?” with emulators, the company states:

“The problem is that it’s illegal. Copyrights and trademarks of games are corporate assets. If these vintage titles are available far and wide, it undermines the value of this intellectual property and adversely affects the right owner. In addition, the assumption that the games involved are vintage or nostalgia games is incorrect. Nintendo is famous for bringing back to life its popular characters for its newer systems, for example, Mario and Donkey Kong have enjoyed their adventures on all Nintendo platforms, going from coin-op machines to our latest hardware platforms. As a copyright owner, and creator of such famous characters, only Nintendo has the right to benefit from such valuable assets.”

We reached out to Nintendo to comment on whether an exclusive right for museums to preserve their games through an emulator system would be just as unacceptable, but did not receive a response as of yet.

By now video games exhibitions have even reached established museums. Only a few weeks ago the “The Art of Video Games” exhibition opened at the Smithsonian American Art Museum. Websites such as www.vgmuseum.com and www.video-games-museum.com are bringing the history of gaming to an online exhibition hall and the Videogame History Museum project raised more than $50,000 on Kickstarter last year.

With these projects proliferating and the curatorial issues remaining, video game preservation is beginning to draw lobbying initiatives. The European KEEP project is one them, which affirms to “consider legal issues concerning the implementation of emulation-based systems and propose solutions which comply with European and national copyright laws”, as well as re-designing emulators for industrial standards.

One way of seeing it is that having their assets preserved is a benefit for the gaming industry, but the big emulator debate is a much more complicated one. We’ve all been observing the SOPA and ACTA controversies over the past months and know too well how hard it is to establish an easing of copyright policy. If you thought that waiting a little while until a copyright has expired would be the easier option: it’s not. According to U.S. copyright laws copyrights owned by corporations are valid for 75 years from the date of first publication. Video games have been around for less than three decades, so all of them will still be copyrighted for decades to come.

Looking at the people behind the lobbying initiatives – museum conductors, the gaming community – and the representatives of the electronics industry, there seems to be a difference in perception. What’s the purpose of emulators? For the first group, they are the only possible way to preserve the software they see as a great part of our modern cultural heritage. For the second group, they are a threat to their valuable assets. If the lobbying is successful, these two groups will find common ground. If the gaming enthusiasts get their way, a legal loophole in copyright will be established and the preservation process will begin.