Justin Fowler is the co-founder of Audio Press– a better way to consume the news and content that matter most to you through audio.

The brain is super quick in establishing connections – it can jump from one idea to the other in a fraction of a second. Your mind is a holding tank for all the memories, experiences, and thoughts you’ve had at some point in your life that haven’t been forgotten. Unfortunately, you can’t hook your brain up to a computer to download information from it… not yet, anyway.

With so much information passing through our brains everyday, it’s impossible to manually record everything that comes to mind. But once in a while, you have that gem – that one idea that sparks your creativity.

Still, if your brain is like mine, the idea will be gone by tomorrow unless I do something about it. Over the years, I’ve developed a system that allows for me to record anything noteworthy, enabling me to look through my thoughts and take action or even expand upon my original idea.

One of the important elements is the ability to capture thoughts from anywhere I am. Therefore, I not only require a system that functions on every device I own, but also one that allows for the sync of data across these devices so I have an exact, up to date version of my notes wherever I am.

I have my iPhone almost everywhere I am, but any smartphone you own will work fine if you set it up in a way that stores your files in a cloud, thus enabling access across your devices.

Keeping your phone handy is helpful because ideas can come from anywhere – while you’re out for lunch, working out, walking to meet up with friends, or taking a train home. Jot down anything you can think of – you never know if your thoughts, questions, or other curiosities can become something bigger when you have the time to think about it some more. 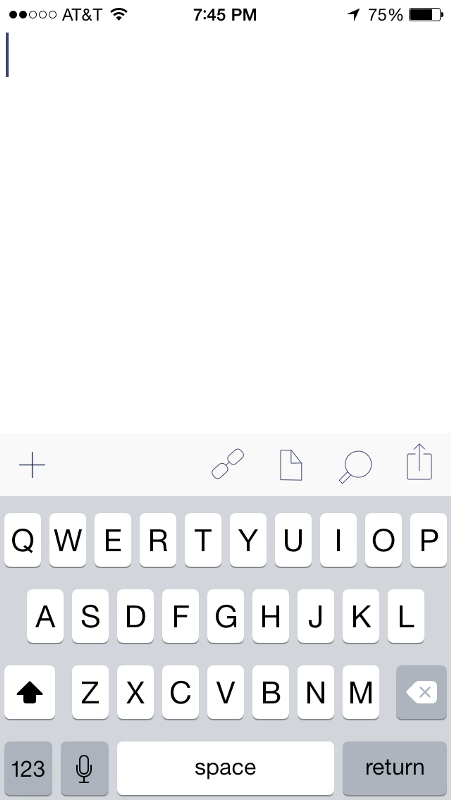 My workflow on my iPhone involves two different apps working together. The first is a an app called Drafts, which was specifically built for text capture.

I personally like drafts because you don’t have to fiddle around with buttons or a UI – launch the app and just begin typing. When you’re done, you have the option of exporting the text to a variety of services such as Evernote, Dropbox, Omnifocus, Tweetbot, and basically any app that accepts plain text as an input.

Once I’ve typed out my idea, I export the note to an app called 1Writer using a custom URL within Drafts.

After looking at several note taking apps, 1Writer has become my favorite. 1Writer will take the text from Drafts, name my new note, and allow for me to add more to the note if needed.

1Writer also has Markdown support, meaning that I can add some basic styles (bold, italic, etc) and 1Writer will allow for me to preview the document with the styles applied.

When I’m done with the note, I simply hit the “Done” button and it automatically saves to Dropbox (more on sync later). Whenever I’m not capturing an idea, I can also use 1Writer to look at my older notes. 1Writer comes with a search feature that is quick and searches the entire document (not just the title).

As proficient a texter you might be, sometimes your thoughts are too complex to type down quickly. Voice recording apps can be useful in a scenario when your stroke of genius arrives at an inconvenient time.

Additionally, it can be helpful to verbally express yourself out loud, if only to re-listen to your tone later. Were you excited by your ideas? Confused? Angry? Passionate? These emotions can help you formulate what to do with your ideas later on – whether it’s a problem you want to try to solve, or a concept you want to design.

When I’m at home, the full sized keyboard connected to my iMac provides a huge advantage over my iPhone for note taking. That’s why when I’m at home, I also need a way to capture ideas (and view old ones) in an efficient manner.

This is where nvALT steps in. nvALT is based on another app, Notational Velocity, hence the name. nvALT take a different approach to note taking with its search/new note bar. In other applications, there is typically a dedicated area for searching, and a dedicated button for creating a new note. nvALT compresses these two tools into one.

Start typing and you’ll get a list of notes that show up as a result for your search, and if you hit enter, you can start a new note using the text you just typed. Super simple, super fast.

nvALT is great for viewing notes since the search is extremely quick and notes can be pulled up with one click. On the left is a list of notes that will either contain all of my notes, or only the notes that show up for my search. On the right I can see and edit my notes.

I picked nvALT and 1Writer because they both support synchronization. The beauty of working with plain text files is that sync is very fast since the files are tiny (my average note is .5KB).

I rely on Dropbox to sync all of my files silently and in the background.

Setting up Dropbox to work with 1Writer is simple: all you have to do is access the settings within 1Writer and enable Dropbox as a service.

I created a dedicated folder on my Dropbox’s root directory (/Write) to store my notes, but you can call it anything you’d like. Once you’ve got it set up, 1Writer will begin to save all of your precious notes to the cloud.

nvALT, unlike 1Writer, does not come with built in Dropbox sync. But there is a workaround.

First, you have to have Dropbox installed on your computer. Next, go to nvALT’s preferences and select the Notes tab. Now select the folder you made in Dropbox that holds all of your notes.

Just a little rerouting gets nvALT to import your notes into the correct folder. In order to make sure everything syncs properly, make sure that under the storage tab within the Notes tab, change the “Store and read notes on disk as:” setting to “Plain text files.”

Every once in a while, you should revisit your notes (or voice recordings) to see what you’ve saved. I was looking over my notes recently and didn’t even remember writing down half of the stuff (glad I did, though!)

Revisiting allows you to add to the current notes you have and to continue thinking about previous ideas. Your thoughts are worth exploring – you just have to remember to remember them.