That’s right, the result of this partnership will mean you’ll be able to buy a co-branded Samsung Galaxy Tab 4 Nook tablet, meshing Samsung’s hardware with customized Nook software. This means you’ll get a reading-focused Android tablet that directs you to Barnes & Noble’s arsenal of three million digital books, magazines and newspapers. 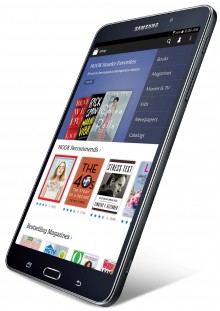 Last June, we reported that Barnes & Noble was ceasing to make its own Nook tablets, moving to a partner-centric model instead. Though that hasn’t stopped its competitors from launching their own tablets designed for bookworms.

It’s expected that the 7-inch tablet will arrive in the US some time in August, and will be sold alongside standard Nook e-readers at Barnes & Noble’s bookstores.

In related news, Barnes & Noble has also announced that its Nook Media division is moving from Palo Alto to new facilities in Santa Clara. The flit will happen by the end of Q1 2015.