This article was published on August 3, 2012

Thursday saw plenty of speculation about exactly what Samsung is launching at the media event it has arranged for German consumer electronics show IFA, and now the company has come clean and confirmed it will unveil the next version of the Galaxy Note ‘phablet’ on August 29 at the event.

We plan to unveil the next Galaxy Note at the Samsung Mobile Unpacked event in Berlin on August 29.

While the comment doesn’t win any records for insight, it does confirm rumours that began when the firm distributed invitations to an event scheduled to take place at IFA, which has traditionally been a launchpad for a number of tech industry players.

Among the action last year, the show saw HTC unveil its Windows Phone-based Titan and Radar. Samsung itself unveiled three new phones at IFA 2011, including its first Galaxy Note – which passed 7 million sales this June. 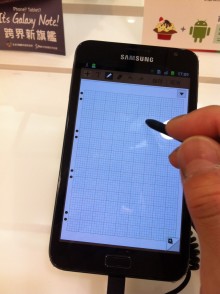 The timing of the launch of the next generation model is particularly interesting. Apple is heavily speculated to introduce its next generation iPhone on September 12, just two weeks later, and that may (or may not) include a smaller iPad device – a possible rival to the Note.

Interestingly, rumours suggest that the new note could be slightly larger — at 5.5-inches — with improvements made to the camera and a faster processor on board.

While Samsung has a history of IFA product launches, the late August timing is teasingly close to Apple’s speculated date. Deliberate or otherwise, that impending iPhone launch will give a little extra spice to the Korean firm’s plans.

Samsung is the world’s top smartphone seller and posted record quarterly profits of $5.9 billion last month. Its newly-released Galaxy S III smartphone has made an impressive start to life, selling 10 million units within its first six weeks, as it begins delivering on its promise to challenge Apple’s iPhone.