Salesforce.com, the enterprise cloud computing software company, has unveiled four new mobile solutions for governments that it says will help better connect them with their constituents.

Saying that governments are facing the same technology shifts as the private sector, Salesforce believes that there’s a customer revolution taking place where citizens are using social media to air their grievances, so governments need to be paying better attention.

The company believes that government agencies may be falling behind the curve if they’re not paying attention to social conversations. With the introduction of its mobile offerings, Salesforce thinks agencies will be better equipped to handle citizen feedback.

Mobile technology is important for governments because when citizens have complaints, they’re not going to wait until they get home to share it on the Internet — they will instead take out their smartphone and upload a photo or compose a Tweet or status update. According to the research group IDC, nearly 90 percent of all smart connected devices shipped in 2012 were mobile.

By being mobile-enabled, governments can not only communicate with citizens, but also collaborate with its partners, accelerate projects, and show the world that it is transparent and open to receiving feedback. 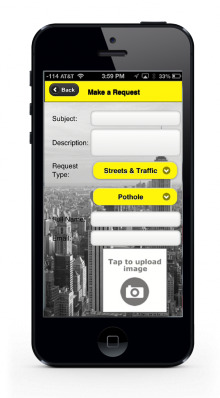 Similar to mobile civic engagement service CitySourced, Salesforce’s Rapid Response 311 is a mobile app that governments can offer for citizens to submit problems they would like fixed in their neighborhood.

Citizen users would find an issue, say a pothole, and in the app, input details about the problem and where it’s located. A photo could also be attached to the ticket request. Once done, the user would submit it to the appropriate agency. Other options in the app include being able to check a request status, or access the city’s knowledge bank.

Once received, within Salesforce, a government agent will view details about the request and can find information related to resolving the problem. A telephony component is integrated giving agents the power to call the submission user for more information.

With Rapid Response 311, governments are able to support individual requests. However, using Salesforce’s Social Command Center, the company says agencies are able to be more proactive in monitoring what their constituents are saying about the city or town and about the government and find ways to fix the problem.

Salesforce says that this command center is not a room filled with computers and people monitoring activity 24 hours a day, 7 days a week. Rather, with its mobile offering, governments can have agents working around town and checking in right from their phone or tablet device to monitor sentiment and opinions relating to rising issues, impacts of policy, how government services are being received, and more.

Leveraging Salesforce Communities, which was unveiled earlier this month, the company is enabling governments to create dedicated spaces for not only their internal teams, but also for citizens and partners to congregate and discuss issues. Salesforce believes that this will help accelerate collaboration and get things done — no longer will meetings be delayed due to scheduling or lack of information.

The last of its mobile offerings, Salesforce is bringing Force.com and Heroku to the public sector to help produce mobile apps that it hopes will expedite development so it doesn’t take years to complete a project.

The company thinks that with the state of the economy and tightened budgets, agencies are looking to have employees work away from the office. However, they need to have the necessary tools to get their work done. Instead of waiting for an exorbitantly long amount of time, Salesforce is making it possible for government apps to be built on any device.

Salesforce currently has more than 500 government agencies using its services, including the US Census Bureau, the Food and Drug Administration, the Colorado Statewide Internet Portal Authority, City of Boston, Michigan Health Information Network, and the New Jersey Transit Authority.