When it comes to food, I’m much more likely to pass over gluten-free, vegan cuisine in favor of the flavorful, carb-heavy Thai cooking I’ve grown up with. But as my metabolism slows and the work-from-home life keeps me mostly sedentary, I decided to take the “You are what you eat” mantra a little more seriously this past winter.

Sakara Life, an organic food delivery service based in New York City, popped on my radar as I was preparing my New Year’s resolutions. The startup, founded by a pair of best friends from Arizona, is often regarded as a supermodel’s diet, with celebrity endorsers like Gwenyth Paltrow, Lily Aldridge and Chrissy Teigen touting the fresh, vegan meals for healthy eating without the prep work.

Can Sakara Life convert a carnivorous, carb-loving beast out of me? Here’s a sample of what I received in my trial.

To start, you fill out a small form indicating any dietary restrictions and preferred delivery time. Next, you sit and wait until your Sakara Life meal shows up in an insulated bag to keep the greens nice and cold (though this was obviously not an issue in the NYC winter).

My first foray into vegan eating did not start well. For breakfast, I received a Clean Green Protein Muffin, which came in a rather menacing shade. It also came with a berry dip that was rock hard, and did not add much to the dry, chalky pastry. I have a bad habit of not eating breakfast regularly, but this did little to convince me otherwise.

My favorite part of this was the strawberry

Things got a lot better by lunch time, thankfully. I was impressed by the size of the Sakara Cobb Salad, which included half of a tasty avocado encrusted with hemp seeds.

In place of bacon, Sakara substituted with coconut chunks. I ended up eating around the coconuts as I found the sweet flavor and tough texture to be a mismatch with the rest of the crunchy greens. 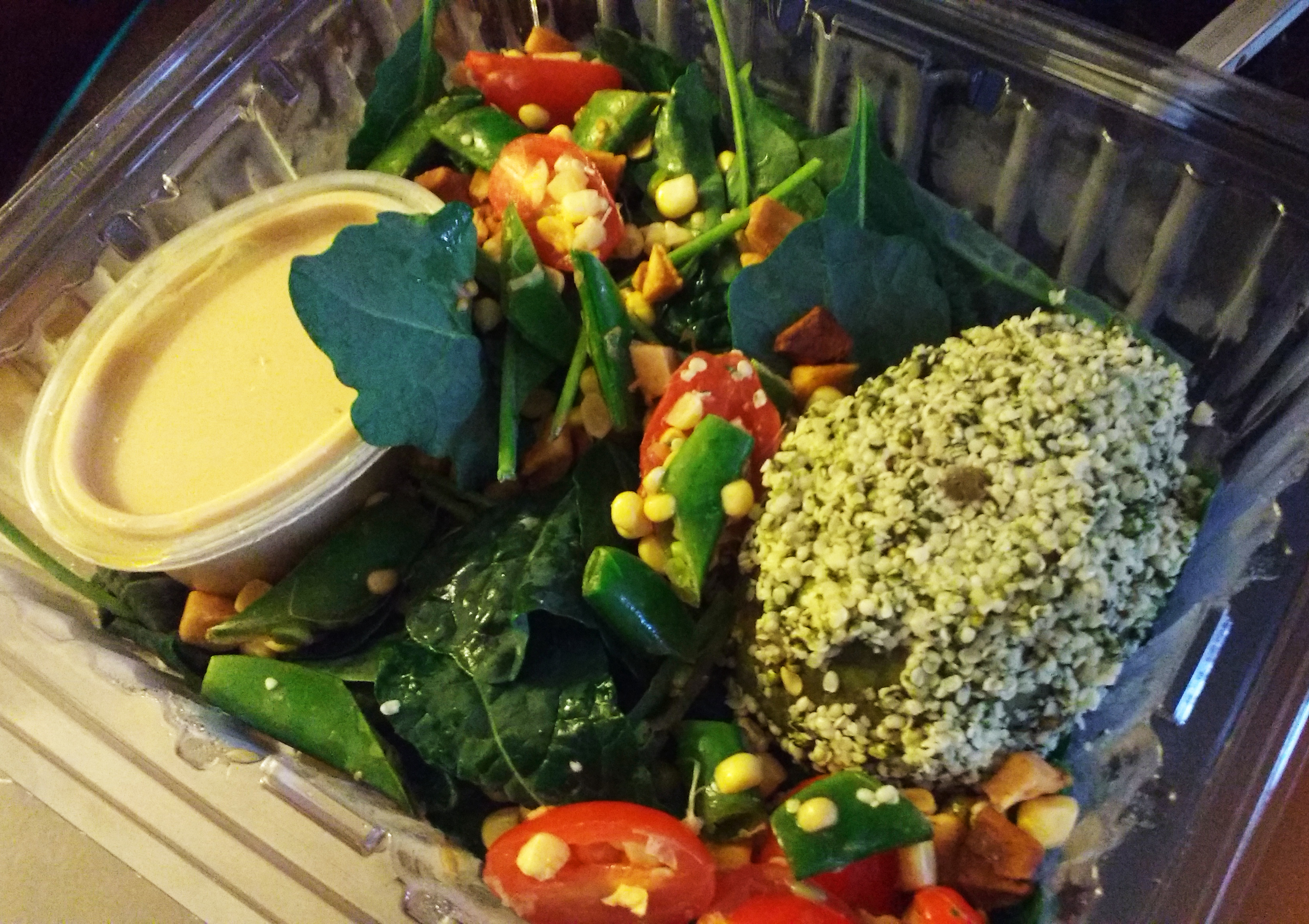 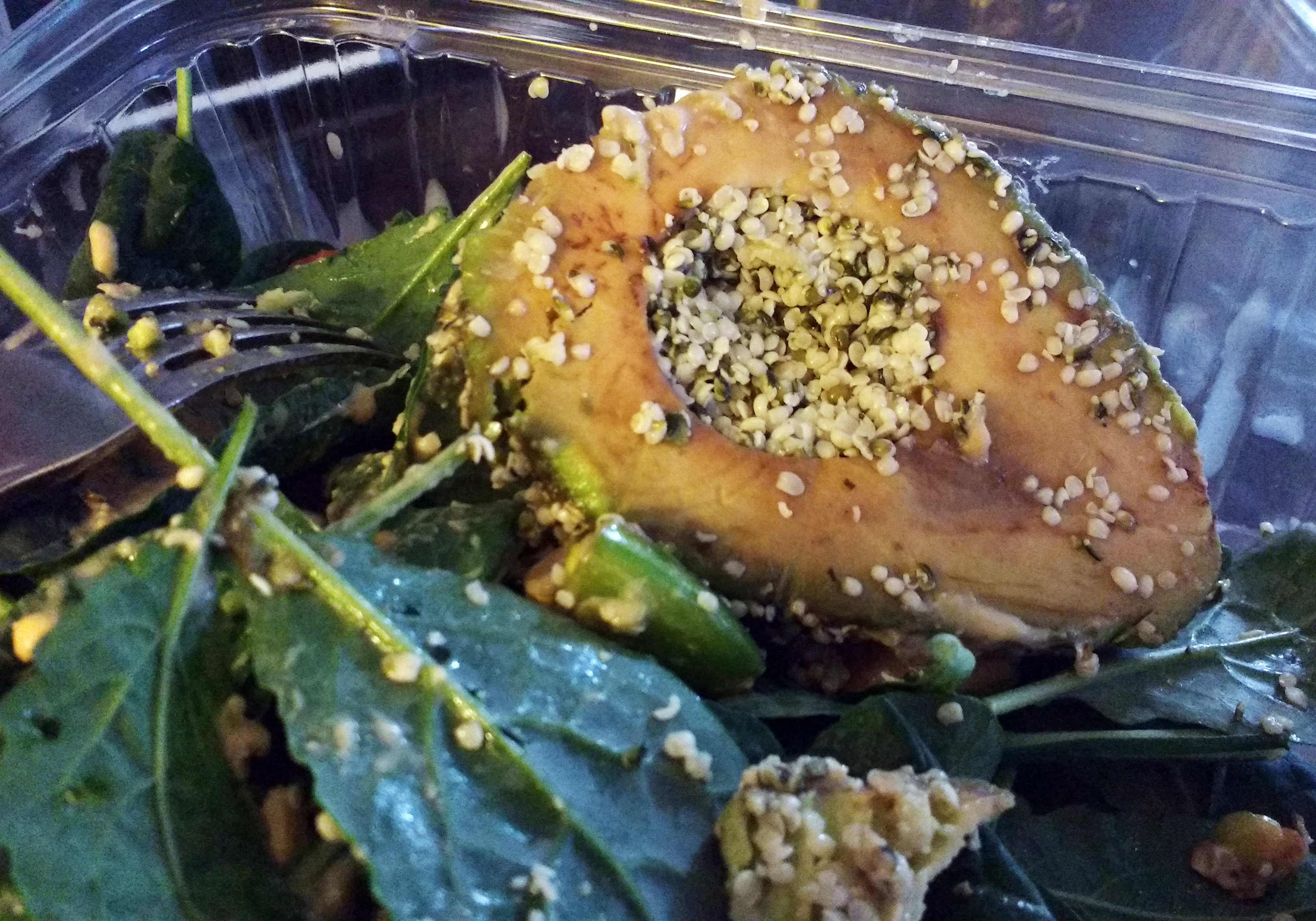 The creamy and tart salad dressing was a great complement, although the avocado itself appeared to have already browned a bit by the time I ate it.

Dinner came in the form of a burrito bowl, which included a lime dressing over brown rice, tomatoes, squash, onions, lettuce and a big dollop of black beans. I’m not personally a big fan of black beans and squash, but I found the burrito bowl to be quite flavorful and satisfying. Many times when I have salad for dinner, I finish craving more food, but Sakara’s portions were hearty and surprisingly filling. I did not feel sluggish afterward, though I also didn’t feel energized.

I’ll admit that I came into this expecting to hate the food, but I was rather impressed with how good vegan meals can taste. However, I do chalk most of this up to Sakara’s salad dressings, which made the meals for me.

Sakara’s deliveries start around $82 a day for three meals, three days a week – which is pretty high especially if you are not constantly eating out. While I enjoyed most of my meals, some of the freshness level left a bit to be desired. However, I might consider investing in its salad dressing since I can control how much or little to use out of the six sampler bottles for $54.

Sakara recently expanded its coverage to service households nationwide, with kitchens based in Los Angeles and New York. I imagine for those outside of bigger cities like NYC, Miami, DC, and LA, the cost of subscription will be even less palatable, especially when it charges extra to accommodate some food allergies. But if you’re at least looking for ideas of how to eat better, Sakara’s S Life magazine and Instagram offer excellent eye candy for healthy food inspirations.

As for me, I’ve reverted back to eating meals that emphasize healthy proteins like grilled chicken or salmon paired with spicy Thai dipping sauces. Maybe it’s not the healthiest thing out there, but at least my wallet is grateful.