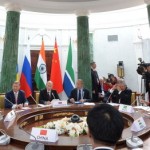 Well, this is awkward. The LA Times reports that USB drives and phone charging cables given away by Russia to other world leaders when it hosted a G20 Summit last month included surveillance devices that were designed to steal information when used.

According to Italian newspapers La Stampa and Il Corriere della Serra, the European Council ordered a technical analysis of the accessories and found them to be “poisoned gifts.” For what it’s worth, the Kremlin has denied the accusations. The alleged spying comes to light as the NSA has come under fire for spying on friendly world leaders.