Alongside the Digital Life Design conference this week was another gathering and exhibition known as 42. Why 42? Because it’s the ultimate answer of course.

42 is a new event specifically aimed at showcasing new tech businesses and as you might expect, it was buzzing with good ideas and fresh talent.  In a country known for technological innovation and mathematics, there’s little wonder that the startup scene in Russia is set to bloom.

“It’s nascent and developing very quickly,” says Lawrence Wright, director of Startup Academy at the Moscow School of Management, Skolkovo. ”It’s in that stage of development where there’s a lot of chaos, the community is trying to see what works and what doesn’t. There’s a lot of things that makes Russia different from America or any other place.”

There has been a lot of change in legislation to help spawn innovation in Russia. Wright notes that this should help pave the way for tech startups, “They’re making great strides in advancing legislation to help transfer intellectual property in a more effective way,” he says. “There have also been moves to give small business owners the ability to take risks and not have to worry about bankruptcy and things like that.It’s not a smooth road, but there’s progress.”

Many of the giants in online business have failed to make a big impact in the Russian market, so this arena is not only ripe for development, it also sees a lot of clones.

Adrien Henni is the co-founder and chief editor of East-West Digital News and he has been watching the startup scene closely. “There was almost no innovation in the field of internet and mobile a mere five years ago,” he notes. “There was copy-paste innovation, like the huge social network that started out as a clone of Facebook. Now there are more and more start ups with very original concepts and there are more and more investors are emerging within Russia and coming from outside.”

So, let’s take a look at some of the startups at 42 who were showing off their work. Many of the links here are in Russian (hardly surprising) so make use of your translation plug-ins and take a good look around.

We’ve taken a look at the development of Hubbub in the past. It’s a social network for sounds CTO, Yuriy Marchuck was at 42 showing off the service. “We are talking with the audience here and representing Hubbub to investors,” he says. “We’ve just done messaging on Facebook and in the next two to three weeks we will do the same with Twitter.”

Hubbub will also be launching payment features soon too. It does not have anything in the way of payment at the moment, but it appears that this will appear a little further down the road as the site evolves.

Travelata is specifically a package holiday site, so it’s slightly different to more familiar sites where hotels and flight prices can be compared and booked separately.

Stanislav Satsuk, executive director says that the site is for more conservative travellers who do not want the hassle of booking separate parts of the a holiday. “This is a new service for the Russian market, there are many examples in the US and in Asia. But in Russia people are just starting to trust enough pay large amounts of money online for significant purchases like their vacation,” he says.

The service came about because Travelata.ru is a travel agency in itself and works with package operators. So access to the product is rather well set up. But before you get too excited, this service is aimed at the Russian market only for now where Satsuk says there is plenty of room for development.

Like Hack is a content aggregator. It makes a personal filter for users that is searchable and also suggests new content based on your own and your friends’ activities. “The aim is to provide relevant content all in one place. Without any extra buttons on your browser or extensions,” says Dmitry Yanin of Zombolab where the site was created.

The idea is to collect links in one place where users can also comment and add more content. It’s an intriguing way of separating the social sphere. For those of us who use social media for conversation but have less time to browse links, this is a good way of tucking those bits and pieces away to return to when there is more time for consumption. 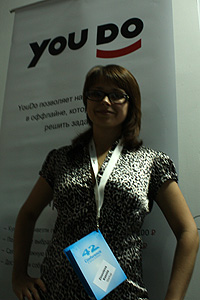 YouDo is a bit like TaskRabbit or Juggle, a place where people can list the things they need done and others can bid on things they want to do in the hope that their price is the right one.

The users are vetted and reputation is key. This startup has global ambitions “Just now we are in Moscow, but we are expanding into Europe too” says communications manager, Xenia Zinovyeva. “We have started out in the Russian language first, but we are adding more.”

The company has a clear plan for making sure that the service is accessible in as many ways possible, in July it will be launching for iphone and Android users to try on the move.

This is an intriguing service that has identified a gap in the market and gone at it with fervour. Apartator is a bit like AirBnB, but for businesses.

“We are a booking engine for any accommodation that is not a hotel. We’re focused on speed and reliability over fun,” says founder, Anton Malkov. “We have a strict criteria to ensure that the quality and service is stable and reliable.”

Apartator’s focus on speed cuts down the average amount of time it takes to nail down a bookng and the back and forth you might expect to find a place to stay. “We cut that down to two hours,” says Malkov. “We do this by providing tools on mobile for accommodation owners and by creating harsh competition. The requests go to owners who respond quickly. So in 90% of cases the owner responds with a place that is bookable within two hours. If they don’t respond, they lose that opportunity.”

The service has a database of ten thousand apartments in Russia and a network of potential partners across the globe. “We’re set to go global soon,” says Malkov. “I am moving to London within the next two months to get a team started there.”

So look out, Western startups, don’t get all comfy in your current environment; the Russians are coming and they’re good at what they do. No only do Russian startups have some new takes on copy pasted ideas where existing services may be too big to pivot there’s also some fresh new ideas that will be welcome on the global market.

Before you know it, the East will be taking a bit out of your possible VC investment pool and growing at a pace where you might be working hard just to keep up.