Robert Cailliau has no blog, no iPhone and isn’t on Twitter. He does have his own WikiPedia page and is known for developing the original World Wide Web together with Sir Tim Berners-Lee at CERN in 1990. He co-authored a proposal for funding for the project and played a key role in the further development of the project.

We always wanted Cailliau as the opening speaker for The Next Web Conference. We invited him and he agreed but warned us in advance that he doesn’t own a mobile phone, dislikes social networks, is not interested in gaming, web video or any visual entertainment found online and cringes every time someone mentions “Cloud computing”. 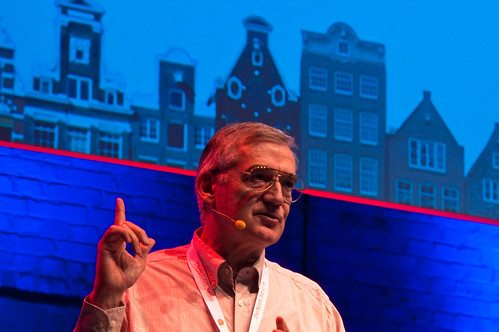 The title of his talk was slightly crypitc; Xx, 20x, Some highlights:

Robert is VERY disappointed with current browsers. Only Safari and Firefox are any good at following standards. Explorer is awful and even Safari on iPad scores exactly 0 points out of 20, according to Robert.

There were several system that were a lot more interesting than the WWW but it was the most scalable one. “It was sooo stupid and simple it had no problem at all with scaling”.

During his talk Robert asked Walter Hoogland, former CEO at CERN, to stand up and then he explained that HE signed the document that transferred all rights for the World Wide Web to the world and away from CERN. The audience launched into a laud applause. Thanks to him we now have a free and world wide Web.

Robert tells the audience that his own website doesn’t look too good but that TheNextWeb.com gives him 320 errors. Ouch! SO at least he confirms to standards.